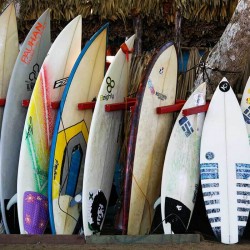 A surfboard is a strong, narrow flat plank used by the surfers while riding an ocean wave. The surfboards are light in weight but robust enough to carry and balance a surfer. The modern surfboards are composed of polyurethane or polystyrene foam which is wrapped with layers of fibreglass cloth, polyester or epoxy resin and all these materials aid in the light yet strong framework that is buoyant and easily manoeuvrable. The surfboard holds its roots in ancient Hawaii where it was first invented. Traditionally regarded as papa he’e nalu (in the Hawaiian language), surfboards have travelled a long way in terms of stability, shape and manufacturing.

The dimensions of Surfboards

Evolution of Surfboards through the years

The traditional boards were made from wood, such as koa and didn’t have fins. Those boards used to have a length of 460 cm (15 ft) or more and were massively heavy. Later in the 1930s, Tom Blake modified the longboard by adding a fin to it that provided directional stability to the surfing boards. Since then, the idea was widely accepted, and various combinations of fins such as two-fins, three fins (tri fins), four fins (quad fins) were introduced for the boards.

In the 1960s, Reginald Sainsbury invented polystyrene surfboards while working for the Poron Insulation Company. By the early 1990s "Glass slipper" shortboards that were extremely thin with extreme rocker became popular. In the later years, the fish designed boards became popular. The modern surfboards are manufactured from polyurethane, fibreglass cloth, polyester or epoxy resin. The modern material aids in making the board lighter and more robust. The most recent modifications in surfboards include the utilization of carbon fibre and Kevlar composite in the manufacturing of the boards.