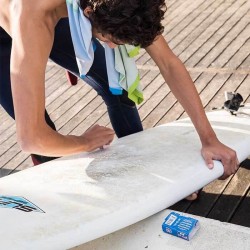 Surf wax, also known as surfboard wax, is applied on the surfboard’s deck, bodyboard or skimboard to increase the friction and prevent the surfer from slipping off the board. The surf wax is made from the combination of either natural or synthetic wax or both materials together and is useful to provide resistance while paddling out or riding a wave. It’s a mixed compound formed with paraffin, beeswax along with petroleum jelly to make the wax mixture a little softer.

The wax also contains a light aroma of various exotic scents such as coconut and bubblegum. Some of the common organic compounds used in wax manufacturing are beeswax, vegetable oils (coconut or hemp oil), pine resin, pulps from the tree and natural essential oils. The wax also aids in maintaining the surfer’s grip on the paddle of any surf kayak or dragon boat.

The large chunks of wax are generally removed with the aid of plastic scraper, and the residual wax is removed by a soft cloth or sometimes with the help of coconut oil. Wax comb is also another popular tool used to remove the wax from the surfboard.