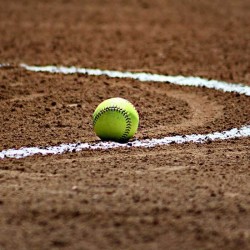 The ball used in softball isn't as soft as the name of the sport suggests. The ball is serviced via an underhand motion and hit with a bat. The softball construction matches with the baseball to a certain degree and has minor differences only including the size. The International Softball Federation regulates all the rules designated with softball's sizing and manufacturing.

Softballs are manufactured by sewing and sticking the core and cover together. The official league matches feature softballs of size ranging from 10 inches to 12 inches, whereas 16 inches large softballs are used in some of the slow pitch city leagues.

During the fast-pitch international matches, approx. 12-inch softballs are used that weighs around 6.25 oz to 7 oz. This size is also applicable for slow pitch matches played by males of 13 and above years of age. On the other hand, the slow pitch softballs for females (18 and younger) and for kids (12 and younger) weigh between 5.87 oz to 6.125 oz and have a circumference of approximately 11 inches.

Types of Softballs depending on the size

Evolution of Softballs through the years

The sport of softball emerged for the first time in 1887 on Thanksgiving Day in Chicago. The first original softballs were used by the Farragut Boat Club and had a circumference of 16 inches. Later, Lewis Robert Sr. organized softball matches (known as kitten ball, lemon ball or diamond ball during those days) for firefighters in Minneapolis and used a 12-inch softball; the size which was highly popularized later. But people of Chicago believe that softball should be played with a 16-inch ball and the games using this size of the balls are referred to as cabbage ball, super slow pitch or mushball. Today, in other parts of the world, 10-12 inches balls are preferred in professional softball matches.