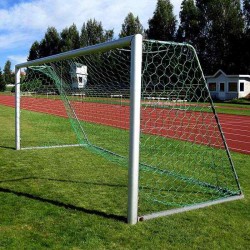 The goalposts are two upright stations or posts which accommodate the nets behind it. The post along with the net is collectively regarded as the goal. The posts are placed on both the ends of the football field. It has two vertical uprights connected by a horizontal crossbar. The inner edges are placed a minimum of 7.32 metres (8 yards) apart whereas the crossbar’s bottom edges are placed at least 2.44 metres (8 feet) above the ground.

The goalposts and crossbars should be white in colour and are composed of wood, metal or any other material approved by the organizing federation. The goalposts have a significant role in football or soccer matches. The goals can only be scored once the ball reaches inside the goal post. The net placed inside the post stops and catches the football and prevent from reaching further or hit any spectator.

The Football Association (FA) has categorized the sizing of goal post according to various age groups and team size.

The football goals were first reported in the late 16th and early 17th centuries. In 1584 and 1602, John Norden and Richard Carew used the term "goals" in the sport of hurling. Carew mentioned that people used to pitch two bushes in the ground, 8 to 10 feet apart and termed that as goals.

Later in 1891, John Brodie, an engineer invented the football nets. The traditional football nets had a different arrangement as compared to the modern ones. The nets were placed straight from the crossbar and pegged diagonally down towards the ground. These nets were able to catch the ball but were not suitable for elite professional games as it holds a disadvantage of rebounding of the ball out of the goal.

Later free-hanging box-shaped football nets were developed to overcome the earlier issues. The modern designing included the net behind the two posts from where no ball can rebound. The goal resembles a box shape and is widely preferred in all professional league matches and in the top football clubs all around the world.