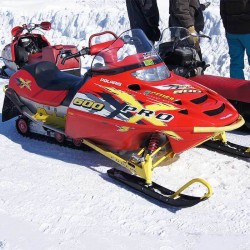 A snowmobile is a motor vehicle used in snowmobiling events to drive on snow. It is also regarded as a motor sledge, skimobile, snow scooter, Ski-Doo or snow machine. The snowmobiles are specially designed to drive on snow and ice without the aid of any specific road or trail. The traditional snowmobiles could accommodate two participants (2-up) whereas modern snowmobiles can accommodate only a single person. The vehicles consist of skis at the front. These are powered with the aid of an engine that continuously propels the snowmobile to move further. The handlebars steer and control the skis while hand squeeze throttle and brake controls are used for accelerating and braking of the vehicle.

In 1922, Joseph-Armand Bombardier manufactured the first vehicle to ride on the snow (which doesn’t resemble the modern snowmobiles at all). Later in 1924, Carl Eliason developed a new modified model to ride over snow called "Motor Toboggan". Later in 1927, he received the patent for his Motor Toboggan design. In 1931, Emmitt M. Tucker modified the machine and named it as the Tucker SNO-Cat which became a foundation for today’s design. In 1937, Joseph Bombardier received the patent for his first snowmobile.

In 1941, mass production of snowmobiles began at the Four Wheel Drive Auto Company (FWD). Further, in the 1950s, George and Allister Ingham manufactured the first Canadian-designed snowmobile. The snowmobile had single-track and was very popular from 1950 to 1963. Meanwhile, in 1957, Polaris Industries produced the first-ever production snowmobile known as the Polaris Sno-Traveler.

In 1959, the first two-seater snowmobile was introduced by Bombardier and was called Ski-Doo (Ski-Dog). In 1968, further modifications took place in the snowmobiles by Yamaha. It included two-stroke, twin-cylinders and had slide valve carburettors.

In 1973, Brutanza Engineering kept modifying the design of traditional snowmobiles and introduced the heat exchangers for the vehicles. The modifications and addition of new elements kept on emerging day by day. In 1976, James Hollander developed the first heated handlebar grips for better control. Later the handlebars became popular as Hot Grips.

In the early 2000s, plenty of new models were introduced by companies such as Yamaha and Ski-Doo. In 2012, Polaris brought in the first-ever belt drive system for the snowmobiles. In recent times, the snowmobiles are designed for extreme mountain riding, heavy snow riding and freestyle riding. The new snowmobiles have high or low handlebars and adjustable tracks. Traditionally, the snowmobiles were always equipped with two-stroke engines but the modern snowmobiles have either four or two-stroke internal combustion engine.