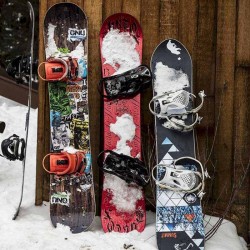 Snowboards are used in snowboarding events which are designed to glide over the snow. The boards have a width between 6 and 12 inches (15 to 30 cm). The riders using the boards are referred to as “snowboarders”. The commercial snowboards require additional types of equipment such as special boots and bindings to help the participants attain an upright position. The size of the snowboards entirely depends on the height and bodyweight of the riders.

In 1965, the first snowboard (Snurfer) was presented to the world. Since then the sport has seen an increasing fan base over the years. Snowboards for the children are generally shorter in length approximately 90 cms whereas the racing boards are longer approximately 215 cm (85 inches). A well-suited board should provide better flexibility to the riders along with equal tail and nose specs or a longer nose with a directional shape.

The snowboards are composed of the strong wood core along with multiple layers of fibreglass to provide strength. Some boards also include materials like carbon fibre, Kevlar, aluminium and piezo dampers for construction. A typical snowboard has followed parts -

Nose - It’s the front region of the board with a little upturn (curve). The upturning aids in proper gliding of the boards on uneven snow surfaces.

Tail - It’s the backward region of the board that is also upturned to provide backward riding (also regarded as the switch) facility to the riders.

Base - It’s the bottom region of the board which stays in contact with the ground. It’s generally made from polyethylene plastic. The bases are constructed according to two designs mentioned below -

Camber - It refers to the bottom contours present on the board. It provides a varying amount of edge contact and pressure on the surface. It assists in providing better turning, pops out and underfoot feels to the riders.

Edge - Metal strips are added on either side of the board. The edges are sharp and provide a sufficient amount of friction to ride on the ice and the edge radius directly affects the radius of carving turns and the motion of the board.

Bindings - The snowboards have specially designed bindings on the surface to hold the boots of the rider. It helps to efficiently transfer the rider’s force to the motion of the board. There are three types of bindings -

Evolution of Snowboards through the Years

In the mid-1960s, Sherman Poppen prepared considerably the first surfboards called as “Snurfer” to ride on snow. The idea spread like wildfire and was highly commercialized. In 1970, a surfer Dimitrije Milovich modified the models into short-boards. He included steel edges, laminated fibreglass, gravel along with nylon straps into the boards. His company “Winterstick” is considered as the first snowboarding company. In the later 1970s, a college student Jake Burton Carpenter added foot straps and fins to the board to increase the stability and a flexible wood-planked board came to the market.

By the end of 1980s to early 1990s, ski technology materials were used to manufacture the snowboards that offered better gliding ability on the snow. The evolution of the boards later included a rounded tail, hard boots, plate bindings, powder boards, race boards, freestyle boards, asymmetrical boards along with twin-tip and carving boards. By the mid-1990s, snowboarding achieved enormous popularity and became the fastest growing winter sport.

During the 2000s, modified snowboard designs were witnessed with better accessibility and travel options. Meanwhile, splitboards were also presented in the market. During current times, a wide variety of snowboards are available for the riders depending upon their needs. These boards are more durable with bearings and camber as compared to the traditional snowboards. The traditional camber had a rise in the tip and tail region followed by an apex at the centre. The evolved cambers are either flat which assist in quick turns with the increased float. The mixed modified cambers are also popular in current times.