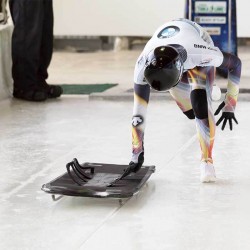 Skeleton is a bit dangerous yet adventurous sport. Participants are required to ride a sled with their faces down over an ice track. The sleds can attain a speed of up to 129 km (80 miles) per hour. The athletes usually lie down over a sled with their belly at the bottom and try to cover the entire track as fast as possible.

The sled is manufactured from steel and lacks any mechanical add-ons such as seat belts, steering or braking mechanisms. However, sled coverings can be provided on the supporting surface that should be easily removable, if required.

The official rules regarding the dimensions of the sled are regulated by the Fédération Internationale de Bobsleigh et de Tobogganing (FIBT). In the official tournaments, the maximum length of the sled should remain between 80 cm and 120 cm and overall height should be 8 cm to 20 cm for both men and women participants. The sleds used by men have a weight of 43 kg maximum, whereas the women sleds weigh 35 kg maximum. Hence, the maximum combined weight (athlete + sled) for men is 115 kg (23.5 lb) and for women is 92 kg (202.8 lb).

The skeleton sleds are composed of a steel frame with base plates made from carbon fibre. Have a look at the other parts of a sled -

Sometimes, ballasts are added in the sled to increase the combined weight of the athlete and the sled.

Evolution of Skeleton Sled through the Years

Traditionally, the sleds used to be made from wood and were very heavy. In 1892, L.P. Child presented the first-ever metal sled in America and was widely accepted over the wooden sleds. It has a stripped-down compact design with metal runners. Later in 1902, Arden Bott modified the sled’s design by adding a sliding seat. It helps the riders to shift their weight forward and backwards. In 2010, FIBT restricted the use of some manufacturing materials. The new sleds were only made from steel with plastic base plates without any steering or braking mechanisms. The riders control it by dragging their foot on the ice and subsequently shifting their weight.