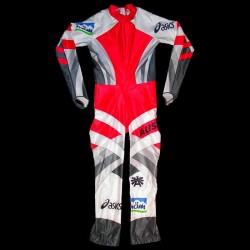 The ski-suits are worn majorly during snowboarding and skiing such as alpine skiing events. The participants are required to wear the suit over their regular clothing. The suits are available either in one-piece similar to a jumpsuit or a two-piece. The two-piece set consists of a ski jacket and matching trousers or ski pants, also known as salopettes. The ski-suit is manufactured from wind and water-resistant fabric or waterproof material. The suits have additional non-removable liner composed of various synthetic and natural fabrics such as nylon, silk, cotton or taffeta.

Ski-suits keep the participants warm during winter sports competitions. The ski suits are designed as a unisex garment made from Gore-Tex or similar materials. Pockets are also added to the suits which are waterproof and help in keeping the items dry.

Types of ski-suits depending on the design

Development of ski-suits through the years

During the 1920s, the sport of skiing developed a huge fan-base. With the increasing popularity, the need for ski suits also increased. By the end of the decade, women skiers started wearing skiing trousers similar to the men. In the 1930s, women’s ski clothing was very much in fashion as well as very functional as it was manufactured from heavy wool, stretchy yarn and had a cotton flannel lining.

During the late 1930s, ski skirts were introduced for female skiers, especially for the experts. By the 1940s, the skiwear became more streamlined and commonly manufactured from wool gabardine and had zippers in the lower legs section.

In 1948, the one-piece ski suit made a debut. It was invented by Emilio Pucci to provide comfort and warmth. Even today, one-piece suits are highly popular. These are considered to be stylish, convenient and comfortable. Tigon one-piece ski-suits are considered as the finest suits which eliminate the additional requirement of the middle layer as these have a very soft fleece lining. By the 1970s, wool was replaced by synthetic materials for manufacturing ski suits. In recent times, the ski suits are modified greatly to become waterproof, breathable and more flexible and come in various colours.