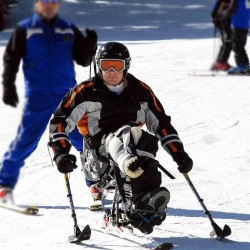 Para-alpine skiing is one of the most courageous sports performed by disabled athletes. It requires unique boards such as sit-ski or mono-ski to perform the events. Mono skiing is performed on a bucket-chair fixed on a central ski. It is specially developed for skiers with disabilities such as spina bifida, lower body amputation or vertebrae injuries. Only athletes with well developed upper body strength can handle the mono-ski as it is controlled or manoeuvred entirely by turning the upper body and using the short ski poles. At the 1988 Winter Paralympics, the mono-ski was used for the very first time.

The mono-ski has a chassis equipped with customized seat affixed on regular downhill ski. The skis have a backrest on the top of the seat with a shock absorber placed between the seat and the ski to provide a smooth ride on rough and uneven terrain. It has a release mechanism which lifts the ski into an extended position. Additionally, the ski also has lap and legs belts for safety purposes as it majorly secures the participant's position during a ride.

Participants with T10 or higher injuries can use skis outfitted with an additional upper torso seat belt. It provides more safety and security to the participants as they have limited trunk muscle control. The monoskiers also use outriggers, advanced Canadian crutches to control, stop or balance their skis. The outriggers are shorter poles and can be adjusted according to the requirement.

Evolution of Mono-Ski through the Years

In the 1960s, mono-skis were invented for people with lower limb disability and use a wheelchair. The customized skis used in traditional times were heavy and complicated. The skis were majorly made from wood and were tough to operate individually. In 1961, the ski was equipped with parallel bindings for the first time by Jack Marchand. For this invention, he received a patent too. In 1978, the first sit-ski in the U.S. “Arroya” was invented by Peter Axelson.

In the 1980s, the skis were modified with a broader base and manufactured from fibreglass equipped with metal runners. The new sit skis are lighter in weight and can be used on a variety of slopes.  Initially, the boards had a length of 9 to 12 feet, whereas the modern boards are approximately 6 feet long and easily manageable.  The new mono-skis are also aided with ‘ski-foot’, which is a plastic or metal boot sole attached with the ski’s binding.

Some of the most notable companies selling mono-skis are Praschberger (Austria), DynAccess (USA), Tessier (France) and so on.