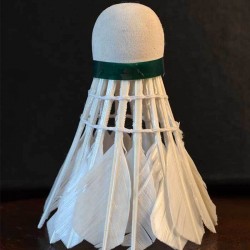 The shuttlecocks are conical-shaped equipment used in badminton. They are also regarded as a bird or birdie. A shuttle can achieve a speed up to 200 mph after being hit by a racket. The shuttles are composed of real feathers, usually of goose or duck. A lot of precision is carried while selecting the feathers because of its flight properties. Feathers from the right or left wing of a goose or a duck are primarily preferred. Mixing the feathers from different wings can severely hamper the flight properties and hence is avoided. The shuttle significantly varies according to the material used for manufacturing. Most professional players prefer feather shuttles over the synthetic shuttles due to their precision and better flight.

The open conical shape of the shuttlecocks makes them aerodynamically stable. The shuttles have a base composed of cork with leather or plastic covering. There are 16 overlapping feathers embedded in the base. The professional shuttlecocks are manufactured from goose feathers of equal height (each 62 mm to 77 mm). Each feather weighs around 1.7 grams to 2.1 grams and the cork has a diameter of 25 to 28 mm (0.98 inches to 1.10 inches).

The feathers are secured with glue and take hours to days to dry up completely. After drying up completely, the feathers are attached with thread and appropriately glued. The length of each shuttle varies from 62 mm to 70 mm and is graded according to their speed. The ideal shuttles should land on the court at minimum 530 mm and a maximum of 990 mm short of the back boundary line of the court.

Evolution of Shuttlecocks through the years

Traditionally, the shuttlecocks were smaller and weighed around 0.17 ounce (5 grams) and were composed of various feather types. The flight pattern of the old shuttles was irregular and unpredictable. Later, during the 1930s to 1940s, the standardization of shuttles took place. The new shuttles had a cork base with feathers attached which increase the flight efficiency of the shuttles. Recently, plastic and hybrid shuttlecocks are also manufactured, which are more durable than the feather shuttles.

Classification of Feather Shuttlecocks depending on their tube number