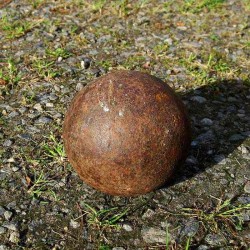 The shot put balls are metallic spherical balls with a smooth surface. The athletes are required to put the ball as far as possible to earn maximum points. While putting the ball, the participants cannot drop it below their shoulder and should rest it near their neck.  The shots are required to land in a 34.92-degree legal sector of the throwing area. The balls are generally manufactured from iron or brass or lead with an external steel shell. The official guidelines of the shot put balls are maintained by the International Association of Athletics Federations (IAAF). The athletes either use glide technique or spin technique to put the balls.

Size and measurement of a Shotput ball

The balls weigh around 7.26 kg or 16 lb for men and 4 kg or 8.8 lb for women. It is composed of various materials such as sand, iron, cast iron, brass, solid steel along with synthetic compounds such as polyvinyl. In general, the material used should not be softer than brass.

Evolution and history of Shot put

Traditionally, the Greeks were the first to throw balls (stones) as a game. Later in the middle ages, the soldiers used to throw cannonballs. In the 19th century, the throwing stones game was modified in Scotland when it was played at the Highland Games. Later the material and manufacturing of the balls were changed to its current form. In 1866, the shot put championships were introduced at the British Amateur Championships. Since then the sport has been widely popularized and a variety of balls depending on weight, age group and gender are available.