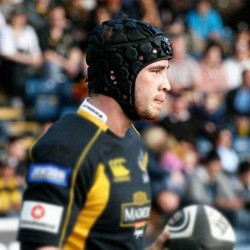 Scrum cap is a safety headgear used by the players during a rugby match. It protects the player from severe head injuries, including lacerations and abrasions. It also prevents them from cauliflower ears or any further ear damage. Traditionally, the scrum cap was used by the forward players. However, in the current scenario; it is worn by all participants, including those who are not playing in the scrum. According to a recent study, the scrum caps can decrease external force impact up to 47%. The cap’s design was introduced by Eurig Evans and was first worn by the Christ’s College Finchley’s 1st XV. The size of the scrum caps widely depends on the participant’s head size. In official rugby tournaments and matches, headgears with the World Rugby tag are only approved.

The headgear comprises of the head cap with forehead part and side protection for the ears. It’s composed of three layers; an outer barrier layer, an intermediate section and an inner wicking layer. The inner layer has several perforations on the surface, whereas the outer barrier layer has several pockets. The middle layer is equipped with open-cell polyurethane foam. The foam has a density ranging between 100 and 300 kg/m3. It effectively reduces the G-force energy which is transferred to the player’s head after being hit.

The first-ever scrum cap had a typical headband design aided with padding on the ear region along with a chin strap. It didn’t cover the head region and was exposed to any external injury. The new caps are manufactured with thin foam with various advance features. Stiff material such as plastic is totally forbidden to use. The caps are equipped with an air vent design that facilitates proper ventilation and prevents overheating.