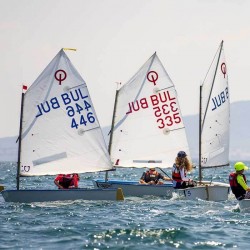 A sailboat utilizes the power of the wind to propel through the water. The boats are regarded as sailboats due to the presence of the sail. The sails tend to drive the boat in the direction of the wind. Various types of sailcloth, such as polyester, nylon, aramid and ultra PE, are used to provide a better sailing condition. The small sailboats are propelled only through the wind but the larger sailboats are usually equipped with an additional engine. The sailboat varies widely depending on the size and its manufacturing. Generally, the competitive sailboats are single-seater and are faster than the recreational boats. The racing sailboats are lighter with a length between 30 feet to 50 feet.

Major Parts of the Sailboat

Sail - A sail is an extended tensile structure made from fabric or other membrane materials. The sails may be manufactured by combining woven materials along with laminated membranes or filaments. The halyards are placed on the top of the sails for hoisting it.

Hull - Hull is the watertight part of the boat with either an open-top or entirely or partially covered with a deck. The sailboats are classified into three types depending on the hull design -

Keel - Keels are situated in the base of the vessel. The keel’s designing serves as the primary backbone for propelling of the sailboats. The keels can stand all the resistive force and aids in stability. The competitive sails’ keels incorporate an improved hydrodynamic feature known as hydrofoils. Enlisting various types of keels used in a sailboat -

Mast - Mast is the vertical shaft used for supporting the sail and the rigging system (consist of ropes, cables and chains). The masts are usually made from aluminium due to their lightweight. Types of the mast are as follows -

Evolution of the Sailboats

Traditionally, a sailboat has a huge ancient record and has been used for recreational activities, daily chores and water sports. In the 1800s, yachting sports competitions grown in popularity and included a large number of participants along with the crown heads of Europe. The traditional sailboats were generally composed of a single-hull construction or monohulls. The monohulls were heavy and slow. Later, the multihulls were introduced to overcome the disadvantages of monohulls. The modern monohulls are aided with fin keels. Recently, winged keels and canting keels are also used in sailboats.

The modern sailboats are wider yet sleeker as compared to their ancestors. The new age keels are longer and shallower, which successfully aids in faster tack. The improved designing of hulls and the advanced hydrodynamic parameters produce less drag. The traditional boats were manufactured from wood that was successfully replaced by the fibreglass. The synthetic materials have replaced the cotton sailcloths to retain better form. All the features have aided in lighter weight and enhance the durability of the sailboats.