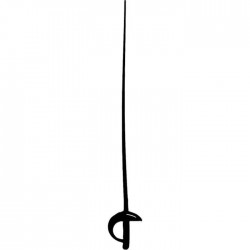 Sabre is one of the three fencing weapons used for thrusting and cutting with the edge and back of the blade. Majorly these swords are smaller than the épée and foil swords are lighter than épée, making them suitable for a complete and swift rotation. The participants are allowed to aim for entire torso region above the waist, including the head, arms and wrist. Only the leg, feet and hands are excluded from the target area. With modern technology development, electrical sabre is widely used.

Manufacturing of the Sabre weapon

The entire sabre weapon has a length of 105 cm (41 inches) and weighs approx. 500 grams (400g in competitions). Sabre has the following basic construction -

History and Evolution of Sabre

During the 16th-century, sabre weapon was first used in the form of the German düsak. It was manufactured from wood (sometimes steel) with a hole in the grip and used to be heavy with a curved blade. Later in 1856, the cavalry practice sword was introduced; then after a few modifications, it was turned into a gymnasium sword. In the 1870s, Giuseppe Radaelli developed a lightweight sabre with a thin triangular blade and an elliptical ring surrounded the knuckle guard. It had a curved blade with 820 to 880 mm length with a weight of 450 g.

In 1988, the electrical sabre was introduced and in the year 2004, the rules of the sport were altered drastically. An electrical sabre has a socket (either 2-prong or bayonet foil socket) and has insulation on the pommel and inside the guard to prevent any electrical connection to be established between the sabre and the lamé (an electrically conductive jacket worn by the fencers).

The earlier version of an electric sabre was equipped with a capteur socket to mark a difference between a good cut and just a touch of the blade with the target. In 2019, the official federation FIE announced their plan to revive the use of capteur socket by using modern accelerometer technology.