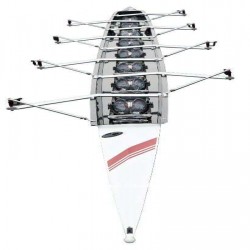 A rowing boat is a narrow, long boat used in the sport to minimize the drag and to make the propulsion faster. There are various kinds of rowing boats which can be distinguished into sliding and fixed seats:-

Fine- Also termed as an Olympic Class boat. It is majorly used by the rowers at inland competitions.

In sweep shells, each rower has only one oar; in sculls, each rower has two oars. Besides skiffs, which are rowed by a single person, shells have between 2 to 8 rowers, with or without a coxswain(the person who directs the crew).