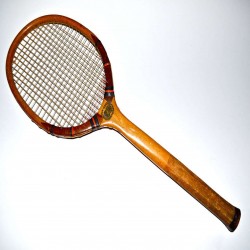 A racquet is a sports equipment used in real tennis that has an open hoop tied with a handle frame. The hoop has catgut, or a network of strings stretched tightly. The heads of the racquets are slightly angled, making it perfect to play shots near to the floor or towards the corners. The equipment is used for striking a ball and is similar to the rackets used in squash, soft tennis, racquetball, racquets, badminton, and padel. Collectively, these sports are called racket sports.

The design of racquets in all racket sports is considerably changed over the centuries. Traditionally, the equipment's frame was made from solid wood, which later shifted to laminated wood. Back then, the strings were made of animals' intestines and thus named catgut. The drawback of traditional racquets size was the weight of the wooden frame. The higher the weight, the more strength it would require to hit the ball. Also, the racquets needed to be strong enough to hold the intestines used as strings.

To eradicate the limitation of the racquets, the manufacturers started making some changes. Starting with the stiffness of the wooden frame, it was improved by adding non-wood laminates. These laminates were initially made of steel, then evolved to aluminium, and later there was carbon fibre composition.

The racquets used in real tennis are made of wood with added non-wood laminates. After every match, the racquets are restrung to meet the professional standards of the game.