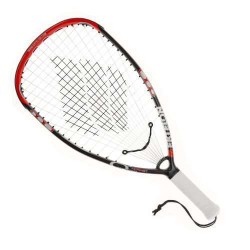 A racquet is a sports equipment used in racquetball that has an open hoop tied with a handle frame. The hoop has catgut, or a network of strings stretched tightly. The equipment is used for striking a ball and is similar to the rackets used in squash, real tennis, soft tennis, racquets, badminton, and padel. Collectively, these sports are called racket sports.

The racket games can be traced back to the 12th century. Back then, the sports weren’t segregated as it is now. The design of racquets in all racket sports is considerably changed over the centuries. In the 1940s, Joseph Sobek, who invented racquetball, used a wooden racquet with a leather wrap on the handle. By 1971, the aluminium alloy was used in manufacturing the frame of the racquet. The following year, fibreglass was introduced and eventually used in the frame. In 1979, graphite was popular allotrope that was used in equipment like the racquets. The game-changer was the oversize frames that were introduced in 1984.

Racquets that are presently made come under the definition of composite manufacturing. A racquet comprises a proportionate part of carbon fibre (fibreglass), alloy metals like titanium alloys, or ceramics. The strings are composed of monofilament, gut, nylon, graphite, metal, and plastic. After every match, the racquets are restrung to meet the professional standards of the game.