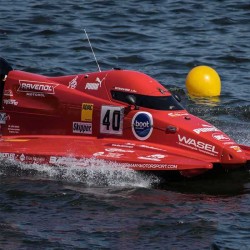 Powerboats are the advanced variants of regular boats aided with a motorized engine. It operates at a higher speed and has a specific hull design. The boats are either equipped with an inboard engine or outboard motor fixed on the rear side. Some powerboats have both the inboard-outboard (hybrid) engine. The engines manoeuvre with the aid of gasoline, gas turbine or diesel fuel. The powerboats are also regarded as motorboats or speedboats. Powerboats are widely used for water sports (such as racing, piloting and navigation events) along with travelling and leisure sports such as water skiing, skin diving, swimming, fishing, etc.

Manufacturing of the Powerboats

The powerboats vary significantly in size depending on the types. The boats are equipped with gearbox, engine and propellers. Depending on the powerboat, a variety of hulls are used. The hulls are either made from wood, fibreglass or metal. Primarily, two types of hulls are used - the displacement hulls and planing hulls. The displacement hulls push the boat through the water, whereas the planning hulls only skim over the water surface. The displacement hull has a V-shaped design or a round bottom. It has a deep draft with a narrower width and a sharp bow. In contrast, the planing hull is flat in the bottom, which successfully reduces the friction.

Evolution of Powerboats through the years

The first motorboats with petrol engines were invented by Gottlieb Daimler and his partner Wilhelm Maybach in 1886. They used a basic small engine with an internal combustion system to propel the boat. In the early 1900s, the motorboats were modified by Rudolf Diesel. He successfully invented a single vertical compression engine with 25 horsepower and four strokes in 1903. His idea became an instant hit, and the new motorboats were highly commercialized.

Later, Ole Evinrude manufactured an outboard motorboat for a limited purpose. Even today, basic manufacturing hasn’t changed much and is ideal for small boats. The traditional motor boards were made from crafting the wooden logs; as a result, they deteriorate quickly. In 1942, with the increase of powerboat utilities worldwide, Ray Greene produced the first fibreglass boat. In the later years, the powerboat was actively used for racing purposes and the requirement for enhancing the speed doubles.

In 1954, William Hamilton invented a water jet propulsion system made up of a vertical shaft centrifugal unit. The new invention added wings to the speed of the powerboats along with increased directional stability. By 1963, the hull’s design was modified into a V-shape. The modification improved the speed, safety as well as the comfort of the powerboats.