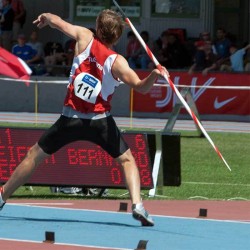 Javelin is the primary equipment used in javelin throw competitions. The design of a javelin is similar to a hunting spear. Traditionally, a soldier or warrior equipped with a javelin is known as a javelineer.  A javelineer uses a specific angle to throw a javelin with a high projectile. The javelin which travels the most extended distance scores the maximum points. The word javelin is originated from an ancient French word "javelot" meaning spear.

Construction and Manufacturing of a Javelin

The javelins are constructed with the aid of wood and metals. It weighs between 400gm to 800gm depending on the age group and categories. Men’s javelin has a length of 2.6m to 2.7m whereas the women’s javelin is smaller and lies between 2.2 and 2.3 metres. The javelin has three essential parts; the tip known as the point followed by the shaft and a cord grip in the middle.

The point - It is the top-most pointed end of the shaft made of metal. The place where the tip of the javelin lands is regarded as the final distance covered.

Shaft - The mid-region of the javelin is regarded as shaft to which the head and the grip are affixed. It is either composed of wood or metal. The shaft has a smooth surface and can be solid or hollow.

Cord grip - The cord grip is present at the centre of the shaft. It is the position used to hold the javelin. Athletes throw the javelin by making a specific angle between the elbow, cord grip and the ground. The grip should consist of a uniform thickness all over and should not be more than 8mm from the diameter of the shaft. The types of grips used in javelin throw are -

Types of Javelins used in the Javelin Throw

There are usually two types of javelins known as the headwind and tailwind.

Evolution of Javelins through the years

The javelin used during the earlier times used to be rigid but had a longer shaft with tip carved from stones. The earlier javelins also lack any grip in between the shaft. In the modern age, the construction of the javelin is highly differentiated as it’s constructed from composite materials now. The tip is made from metal, and the shaft is majorly wooden or metal. The grip is made from cord and is 150 mm wide.

With the coming age, the weight of the javelins is significantly decreased to enhance its performance. Other modifications in between include the addition of holes, rough paint and dimples. Although later on, these modifications were forbidden as they increased the tail drag. The significant changes through all these years include shifting of the centre of gravity 4 cm forward, reducing the front surface area and increasing behind it (the centre of gravity). All this was done to decrease the frequency of flat landings and to safely stage the event within the confines of the stadiums.