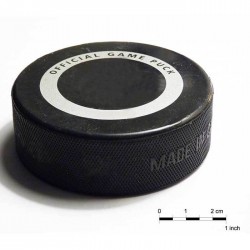 The ice hockey pucks are made from vulcanized rubber, giving it a hard rigid structure. The ice hockey pucks are usually disc-shaped and are black in colour. These have a diameter of 3 inches (76 mm), the thickness of 1 inch (25 mm) and weigh around 5.5 to 6 ounces (156 to 170 grams). The pucks are typically light in weight so that they do not break the ice floor. These have their specific logo and marks. The player’s principal objective is to strike the puck with the ice hockey stick into the goal post.

Variations of the Standard Hockey Pucks

The pucks undergo various other modifications to enhance their effectiveness, velocity and strike rate. The steel pucks are the heaviest pucks with a weight of 2 pounds (910 grams) and are ideal to improve the wrist strength. The white pucks used by goaltenders for practice purposes are of standard weight and size but are made from white rubber. The other types of pucks used are the fluorescent orange hollow pucks which are lighter in weight. These are suitable to play on harder surfaces such as the road and the floor.

Manufacturing of the Ice Hockey Pucks

The pucks are made from natural rubber by vulcanizing them at a higher temperature. The rubber is usually mixed with antioxidants, sulphur, composite materials and other chemicals to increase its durability and stiffness. A pultrusion machine is primarily used for the manufacturing of the pucks. These pucks are later compressed either in cold or by heating the moulds at high temperature (149 degrees Celsius) for 18 minutes. After compressing in a suitable temperature, the pucks become rigid and hard. These are then cleaned and trimmed for the finishing touch and get rid of the extra rubber.  The pucks are usually frozen prior to the usage in a match to decrease their stickiness to the ice and made them glide more on the surface. The major manufacturers across the globe are; Viceroy, Sher-wood, Pro-flex, (Canada), Rubena, Vegum, Spalding etc. The hockey puck uses carbon black as its primary additive which induces its black colour and reduces its tensile strength.

Evolution of the Ice Hockey Pucks through the years

The ice hockey pucks were first invented in the 1870s with wood or rubber (by slicing of the rubber balls) and had a flat square shape which was hard to handle over an ice surface. By the 1880s, round pucks were introduced and manufactured by the Victoria Hockey Club of Montreal. Later, to increase the velocity and pace, the pucks were produced by attaching various rubber layers together to make a solid puck. The shape and manufacturing of the pucks were again changed by using synthetic materials. By the 1990s, the NHL standardized the puck designing for the official tournaments and games. Nowadays, the pucks have a textured edge to increase the friction and striking rate. These are now manufactured from vulcanized rubber as the earlier natural rubber usually breaks down or chopped off in cold temperature.