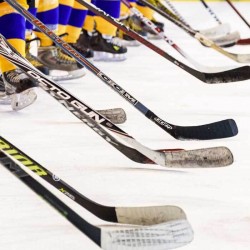 The ice hockey sticks are used to strike the hockey puck across the ice in their specific goalpost. The sticks are "L-shaped" with a blade positioned at 135 degrees approx. from the axis of the shaft. The goalkeepers use a different variant of the sticks which are wider in the lower part than the general one with a slightly curved blade and smaller angle.

The sticks are manufactured with four common materials and hence been classified according to it. The material used for production aids a lot in its performance. Today carbon-fibre, fibreglass sticks along with the composite sticks are widely popularized due to their effective strike rate and contact with the ball and ice during the official matches and tournaments.

Evolution of Ice Hockey Sticks through the years

The ice hockey sticks were first manufactured in the 1800s from a single piece of wood. Later in the 1930s, the sticks were started to be manufactured as a two-piece or three-piece stick. In the mid-90s, the first composite blade was manufactured and in the later years, fibreglass and carbon fibre materials were preferred for manufacturing of the sticks.

The early sticks were heavier in weight but extremely durable in contrast to the sticks used in the modern age. The lamination of the layers of wood stick helped to increase the flexibility of the sticks as well. The new-age ice hockey sticks are little expensive as compared to earlier models, but their performance rate makes them an ideal choice in every ice hockey tournament.