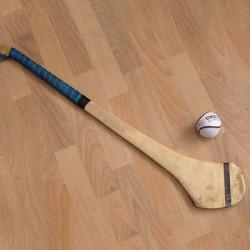 Hurling is a popular western team sport widely popular in Ireland. It is an outdoor sport where two teams compete against each other and try to earn a goal. It is done by striking a small ball known as sliotar with a hurley (hurling playing stick) inside the opponent team’s goalpost. The hurling stick’s official dimensions and standards are administered by the Gaelic Athletic Association (GAA).

Manufacturing and Construction of the Hurley

The hurley sticks are made from wood with steel bands to reinforce its flattened end. The size of the hurls varies significantly with the height of the players. Choosing the right size hurley is very crucial for the game as it affects the swing. It should be long enough to touch the ground while gripped from the handle holding with relaxed arms and parallel to the player’s leg. The hurls usually have a length from 45 to 96 cm (18 to 38 inches). It has four following essential parts -

The Evolution of Hurling Sticks through the years

The hurley or the hurling sticks since the beginning of the sport are made from ash wood. The flattened end of the sticks is protected by a steel band. In the 8th century, the higher authorities such as the king’s son had the privilege of using a bronze band, whereas others could only use a copper band. During the 1970s, for some time, Wavin, a Dutch manufacturing company, started producing plastic hurleys but since these were likely to cause injuries so were soon phased out. In the 1980s, a little modification was incorporated in the manufacturing of the hurls to increase its durability.

Nowadays, the broken hurleys can be repaired via splicing technique in which the bas from another broken hurley is taken and fixed to the broken bas with the help of glue and nails and then the joint is then hooped and sanded into the appropriate shape. The modern hurls are more durable, cost-efficient and project a varying degree of strike rate. Hurleys are also given as a gift to politicians in Ireland.