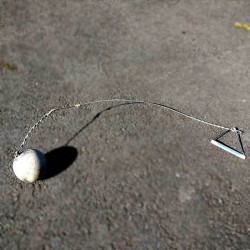 A hammer used in hammer throw is equipment with a steel wire adjoined to a metal ball at one end and a handle at another. It is nothing like the tool with a similar name. The size of the metal ball varies as per men's and women's competitions.

The traces of hammer were first found in 2000 BC. The Tailteann Games held in Tara, Ireland, among the Celtic warriors give us a glimpse of the chariot’s wheel held by its axle used before the hammer came into existence. The wheel was replaced by wooden attached to a boulder. In England and Scotland, sledgehammers were used during the middle ages.

As per popular lore, King Edward-I prohibited weaponry in the late 13th or 14th century, which spiked the use of the hammer. In a 16th century drawing, English king Henry VIII is seen throwing a blacksmith’s hammer.

Standard Hammer as per IAAF

Weight of the hammer