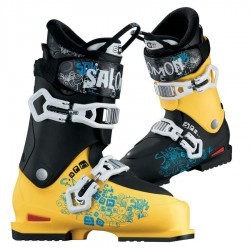 As essential as the skis are for the game, other crucial things also hold utmost importance. Skiing is a game that is majorly managed by foot. Thus, boots are an extremely critical piece of gear. Needless to mention, no matter how selective you have been for the skis, if the boots aren’t up to the mark, then skiing is no fun.

In skiing, boots not only comforts the leg but also acts as protective gear to the lower leg and ankle while they balance the ski. The function of the boots is tricky in skiing, and this is why they are relatively harder and less flexible than regular shoes.

The skiing boots' primary function is to transfer force into the skis. Therefore, they are designed in a way that the ankle remains less flexible, and the lower section of the foot gets to manage the ski. By adding stiffness in the ankle region, the boots become hard to walk. They can’t be treated as regular boots. Also, even well-fitted boots can be uncomfortable as there is excessive pressure on the feet and legs.

The sole of the ski boots is made in a way that can sit firmly on the skis.

Shell : The shell section is the solid outer layer of the ski boot. This section has two parts, namely the lower shell and the cuff. The foot sits on the lower layer, and the cuff is something that goes around the skin. The shells are made with a composition of two or three plastic materials like Polymer, polyether, or polyurethane. The shell is responsible for stiffness, comfort, flex, and strength in the boot.

In all ski boots, there is a tilt in the lower leg forward. The cuff present obstructs the ankle movement towards the sideways. This adjustment in the boot is made to give the knee and ankle the space to bend between 14 degrees and 17 degrees while the skier is standing.

Insole : The footbed or insole is the platform on which foot rests. The ski boots come with replaceable insoles. These insoles are often customized by the athletes and replaced after buying.

Strap : The top section of the boot usually has a velcro strap. This tightens and provides extra protection to the boot.

Cuff : The cuff controls the sideways action of the foot. For the ones who have a knock-kneed stance, they need a cuff tilted inwards. Most of the boots allow one-degree movement in all directions. The cuffs usually are adjusted from the outside on the ankle’s side of the boot.

Shock Absorbers : The footboard of the shell has different materials to reduce the vibrations and shocks transferred in the foot.

Women’s leg is different from men’s in many ways. The size of the foot has substantial differences when it comes to men and women. The placement of calves muscles is lower and shorter; also, the ankles is thinner. Therefore, the ski boots are specially designed for women with extra soft plastic and warmer liners.

The ski boots are specifically developed for skiing. They protect the skier against bumps, jolts, injuries, and others. The ski boot firmly locks the foot but at the same time allows the movement to a certain level. For the ankle, there should leave room for flex but simultaneously allowing the transfer of every steering movement to the ski. The thickness tolerance of the boot is 43 mm.