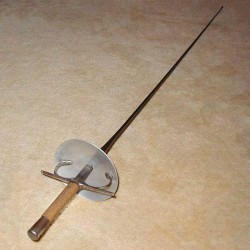 Foil is one of the three weapons (other being sabre and épée) used in modern fencing competitions. Foils are also regarded as thrusting or point weapons sometimes, the blades of which easily bend after touching a surface to reduce the chances of injuries. The target for foil fencing includes the torso region (region of the body from the shoulder to groin) and back of the waist. The off-target areas in foil fencing are the opponent’s hands, feet, head and neck.

History and Evolution of Foils

The foil weapons were known to be originated in the 17th and 18th century. They were widely popularized due to their unique manufacturing and a flattened tip. However, foil competitions for women were started in 1924 at the Paris Olympics.

The basic structure and production of the foils haven’t changed in years. The modern foils are aided with electric sensors. The sensors immediately record any touch and help in digital scoring. Electric foils reduced the possibilities of human errors and are very precise. This development has been considered as a revolution in the world of fencing. Electronic foil has been officially accepted in 1956 at the Olympic Games.