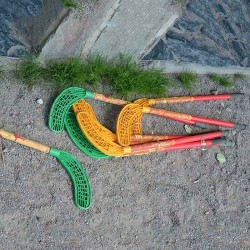 In the sport of floorball, choosing the right blade/stick is very crucial in the performance of the players. The length of the stick and the flexibility of its shaft also play an important role in a floorball match. The stick is used to hit the ball inside a goal to score points so its construction should be precise enough to hit the ball in the right manner. The blades of the sticks can either be left or right which denotes the way, the stick is supposed to be held by the players.

Manufacturing and Construction of Floorball Sticks

The floorball stick usually weighs between 250 g to 300 g. During manufacturing of the sticks, the flex is measured by applying a weight of 30 kg. According to the height of the players, the length of the stick also varies. For a player with height under 1.30 m, the shaft length should be 70 cm, for 1.45 metres it should be 75 cm and so on. Players with over 1.95 metres height, the length should be 100 cm.

There are three parts of the floorball sticks. Have a look -

Evolution of the Floorball Sticks

The floorball sticks were earlier used to be made from plastic tubes which can be still found in some toy stores. The new modified sticks, on the other hand, are made from various artificial materials making them a little sturdy and durable. The blades used in earlier times used to be loosely fitted and the shafts have a smaller diameter. In recent times, significant changes have been made to modify the blade surface and effectiveness. The revised new version sticks are lighter, durable and have better ball handling capabilities. The rules and regulation related to the modification of the sticks are generally governed by the International Floorball Federation (IFF).