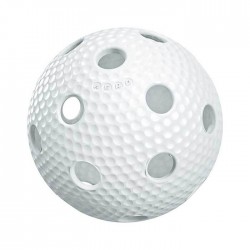 Floorball is a widely popular sport played between two teams comprising of five players each along with the goalkeeper. The game is a derivative of floor hockey invented in Sweden in the late 1960s. Floorball is the most crucial equipment which differentiates the sport from other hockey derivatives. The rules and regulations regarding the sport and the usage of equipment, their dimension and manufacturing is monitored by the International Floorball Federation (IFF). The primary objective of the players is to hit the ball inside the goal with the aid of a floorball stick.

Floorball production plays a significant role in the match. Inaccurate construction hinders the striking rate of the players. The balls are usually manufactured with the aid of aerodynamic technology with various small dimples on the surface. The balls sometimes travel at a staggering speed of up to 200 km per hour (120 mph).

The balls used in the official matches have a diameter approximately 72 mm (2.8 inches) and weighs around 20g to 23g (0.81 oz). These balls have 26 holes, each of which is 10 mm (0.39 inches) in diameter. The dimples on the ball aid in the reduction of air resistance and friction with the surface (floor). The balls are usually white in colour. According to the rules of the IFF, single-coloured balls should be used in official national and international matches. However, two-coloured balls are also used in some places like Sweden, especially for training purposes.

Types of balls according to the production technology

The balls used to play floorball are hollow spheres which are usually heat resistant and are produced from the heated plastic. The sphere is achieved by joining the two hemispheres either via ultrasonic or Teflon welding. The balls are hence classified according to the welding criteria -

Evolution of the Floorball through the years

With changing time, the sport is widely popularized and modern methods are used for manufacturing of the balls. In ancient times, the ball used to be made from cork and light wood and hence lack ductility and sometimes breakdown during the matches.

In modern times, the balls are constructed with anti-shock and heat technology. They are usually manufactured with hard plastic and are lighter than their previous versions. The surface consists of uniform dimples and holes, which reduces the tangential force and air resistance. The reduced friction between the surface of the floor and the ball aids in achieving high speed and striking rate. The balls are so durable that they have a shelf life of 3 to 5 or even more years.