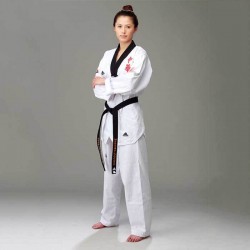 Dobok refers to the traditional taekwondo uniform used in all official matches and regular practices. "Do" means way and "bok" means clothing which forms "clothing of the way". It’s a basic uniform consisting of a jacket and pants. The jacket is usually white in colour with a central region which can be opened or closed by its centre. The pants have a basic design and a loose baggy fit. On jackets, usually, the flag of South Korea (or the representing country) and the federation logo is embroidered.

The dobok comes in typically black or white colours, but in a few other martial arts, various different colours are seen such as brown, red, blue and gold. Around the dobok, a belt known as the "tti" is worn. The belt holds the jacket adequately and represents the degree of the taekwondo practitioners. The colours of the belt according to the degree are white, yellow, orange, green, blue, red, brown or black. The belts are mostly single-coloured but can consist of two colours too.

The taekwondo dobok consists of 3 parts - pants, jacket and belt. The pants and jacket are white in colour as white is a symbol of purity of martial arts. The left side of the jacket is known as ‘yanggi’ which denotes mind whereas the right side is called "umgi" that represents strength. The white baggy pants, on the other hand, represent the earth and jacket symbolizes heaven. The belt symbolizes the man surviving on the earth with a hope of heaven.

At the Taekwondo Poomsae competitions, usually, the master wears a golden jacket & black pants and the athletes typically wear a white dobok. The girl participants, however, can wear red pants and the boys can wear blue or black pants.

Evolution of Dobok since ancient times

Taekwondo was developed during the mid-1900s, around 1940 to 1950 in Korea. Taekwondo has its roots in the war fights and hence the need for uniform solidified. During those days, the Korean Hanbok was popularized. The uniform was very loose yet comfortable and facilitated a good range of physical activities and motion. Later, Gugunbok - an official war uniform followed similar designing style as the hanbok.

The inner layer of the uniform known as "dongdari" had a fitting to the shoulders but used to be billowed out at the chest and sleeve areas. With passing years, the length of pants and sleeves was changed, but the basic uniform structure remained the same. The modern time doboks are most comfortable and come in various colours depending on the rank. The specific black v-neck is only allowed for black belt holders.