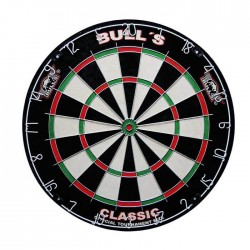 Darts is a popular sport played between two or more player teams and individual setups. The objective of the game is to score more points by aiming at a circular disc, known as the dartboard. The dartboard has particular marked areas where the darts are hit by players and points are scored. The game is considered to be originated from archery. The standard numbering and point system was created for the first time by Brian Gamlin in 1896.

Official Dimensions of a Dartboard

According to official regulations, a dartboard has a diameter of 17.75 inches (451 mm). It should be placed on the wall such that the bull’s eye is at a height of 5 feet 8 inches from the ground.

A dartboard is circular with 20 segments divided on an entire 360 degrees board. The centre lines of each section bisect both the horizontal and vertical axes of the circle. The boards are usually dyed after manufacturing. Typically, a black colour dye is preferred with silver wire.

The beds or segments divide the dartboard with the aid of spider which is basically metal or plastic dividers that help in isolating the beds from their neighbouring regions. The soft tip boards may not have spiders. The dartboard has alternate numberings with high and low-value targets. The lowest-value targets surround the high-value targets.

History and Evolution of Dartboards

Initially, before World War I, the dartboards were made from elm or other solid blocks of wood. It was constructed with the aid of soaked log-end and metal strips and wires were incorporated to create the segments.

In earlier times, the spiders were made from wires tied in the bristle board. With recent modifications, the spiders are composed of triangular wires which help in reducing bounce-out of darts. With advanced technology, the usage of thin metal blades has overshadowed the use of spiders. The blades are cut into the bristle board and provide least divider size with additional target space. Blades have also decreased the rate of bounce-outs of the darts.

The Arachnid Galaxy boards have a large spider size, and the Valley Cougar boards have very small spiders. In previous times, the dartboard was referred to as “butt” that comes from a French word “but” meaning target. In 1919, Edward (Ted) Leggat invented a new clay variety called "Nodor". By the early 1920s, Nodor clay was used to prepare the dartboards but its quality wasn’t satisfactory. Later in 1931, Frank Dabbs suggested Ted for the modification of the dartboard by using ropes. So the new dartboard was manufactured from short rope pieces that were bound tightly to form the board surface and were known as Nodor Original Bristle dartboard. Those dartboards were manufactured from fibre obtained from the Sisal plant. Till now, the sisal dartboards are widely used with very little modifications in the construction process.