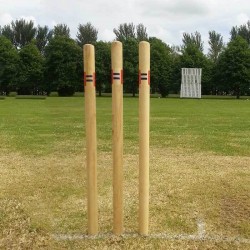 In the sport of cricket, the stumps and bails together form the wicket situated at the end of the pitch. The bowler usually tries to bowl the ball in a certain way that it should hit the stumps. This method is called stumping or being stumped through which the batsman is knocked out / dismissed.

Construction of the Cricket Stumps

The stumps are three vertical stands on which two bails are supported. The entire wicket is made of wooden (referred to as ash) stumps and bails. Each stump has a height of 28 inches (71.1 cm) with a diameter of 1.5 inches (3.81 cm) to 1.38 inches (3.49 cm). One end of the stumps contains spikes. These spikes help in the insertion of the stumps into the ground. The top of the stump has a U-shaped groove, helps in positioning and support of the bails.

History and Evolution of the Cricket Stumps

The complete three sets of stumps were used in 1775. Before that, only a set of two stumps was used in cricket. The recent modification of the stumps includes sponsor’s logo. Nowadays, stump-cam is also used which provide a unique view for action replays, specifically when a batsman is bowled. With the recent advancement of technology, the stumps are aided with red LEDs (popularly known as Zing Bails). The lights only put on when any ball strikes the stumps directly. The LED stumps were used for the first time at the ICC World Twenty20 in 2014. Since then the new modified stumps have been used in every limited-overs matches as well as day/night Tests.