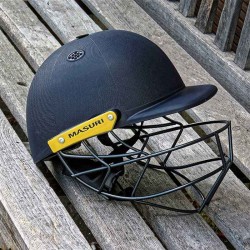 The cricket helmet is a crucial safety equipment used to protect the player’s head from any injury resulted from being hit by the ball. It is used by batsmen, wicket keepers and close in-fielders. The ICC Clothing and Equipment Regulations made it compulsory to wear a helmet during a cricket match. The helmets conforming & labelled with the British Standard “BS7928:2013” are used in the modern-day cricket and manufactured in compliance with the safety standards set by the ICC. This ensures that the helmet has been tested against men’s and junior’s standard size balls of 5.5 ounces and 4.75 ounces, respectively.

Manufacturing of the Cricket Helmet

Masuri is one of the most preferred brands of cricket helmets used by professional cricketers. Masuri’s popularity can be gauged from this fact that the helmets of this brand were worn by 70% of the cricketers during the 2019 Cricket World Cup. They are also the original inventors to produce neck protectors attached to the helmets. The full-sized helmet with bars on the front is preferred for cricket matches.

The modern helmets are manufactured so that these can absorb the ball’s energy bowled with any speed. It contains an inner cavity made of foam within both the shells (inner and outer). The helmets have ventilation holes to vent out all the heat inside. These are now made with moulded plastic or man-made fibre. Visors are used to fit the helmet near the ears and the straps are required to fit the helmet firmly. The grills (visors) are usually made from steel, titanium or carbon fibre.

History of the usage of Cricket Helmets

In the 1930s, Patsy Hendren was the first person to use a protective hat in cricket matches. Until the 1970s, the use of helmets was not common during practice or play. The helmets were used in the World Series Cricket for the first time by modifying a motorcycle helmet. On 17th March 1978, Graham Yallop from Australia was the first cricketer to wear a helmet in an official test match. Later, the usage of helmets in the Test matches was popularized by the English player Dennis Amiss.

Since 2017, the ICC doesn’t pass laws regarding the requirement of helmets to be worn; rather the test nations decide it for themselves. However, the England and Wales Cricket Board requires all its batsmen, wicketkeepers & close in-fielders to wear helmets in the first-class cricket. New Zealand Cricket & the BCCI doesn’t mandate it for its players to wear helmets.