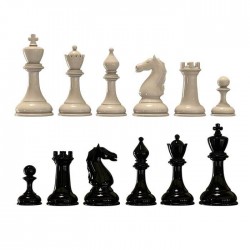 Chess pieces or "chessmen" are equipment used by the players while playing chess. These chess pieces are moveable objects. When a player changes one piece's position, this movement is known as "making a move." A set of chess pieces come in 32 units of light coloured (16 pieces referred to as white) and dark coloured (16 pieces referred to as black) chessmen. The game is played between two opponents. Each opponent selects one coloured, either black or white. The white makes the first move.

Composition of the sixteen pieces used in chess

In a regular game, each of the two players starts the game with the following sixteen pieces:

Usage of the word "Piece"

The word "piece" comprises three meanings, depending on the context.

Moves of the Chess Pieces

Rook - The rook pieces can move in any vacant squares, either forward or backwards or in the left or in the right direction. A rook participates in castling move along with the king.
Bishop - The bishop pieces are allowed to occupy only the vacant squares by diagonally moving forward or backwards in a straight line. The bishop stays on the same colour squares. Yet, as there are two bishops, they occupy each colour for the respective player.
Queen - It is regarded as one of the powerful chess pieces with access to move in any direction such as forward, backwards, left, right or diagonally.
King - The king can move in any direction but only one vacant square. The king is restricted to move towards an attacked square. The kings have an unusual special castling move in which they can exchange their position with the rooks. Castling is only performed once during the whole match, but no pieces should be present in between. Castling cannot be performed if the king is under check. If any player checks mate the king, they eventually win the match.
Pawn - The pawns can only move forward one square at each time. At the beginning of the match, the pawns can move two squares at a time. The pawns can knock off the enemy pieces placed in the diagonal position (set either left or right). The unusual move to attack and knock off the enemy is regarded as en passant. If the pawn successfully reaches the enemy's back rank, they can be exchanged and promoted to queen, bishop, rook or knight. The pawns can be promoted to any pieces that are already present on the board.

As per FIDE (International Chess Federation), chess pieces' material should be either made of wood, or plastic or an imitation of these materials. The height, weight, and size of the pieces should be proportionate to their height and form. The pieces' prescribed heights are King – 9.5 cm, Queen – 8.5 cm, Knight – 6 cm, Bishop – 7 cm, Rook – 5.5 cm and Pawn – 5 cm. The diameter of each piece's base should measure 40 to 50% of its height. The tolerance in the dimensions is by 10%. The chess pieces should be designed in a way that they are clearly distinguishable from one another. In particular, the top of the King's crown should distinctly differ from that of the Queen's.

Evolution of chess pieces over the years

The exact tracing of chess' invention hasn't been found yet. However, it is has a few mentions in India during the 6th century. It was found that in the 7th century, the game was regarded as 'Chaturanga' with different pieces that had distinct powers. Later on, the board game developed into "Shatranj", where the opponents were required to eliminate the king. The game travelled different parts of the worlds and evolved.

By 1300, the pawn gained the ability to move two squares in the first turn. In 1700, one of the earliest chess piece design was recorded by John Calvert. He successfully crafted crowns over king and queens and a tower to the rook. In 19th-century chess, the design was adapted from St. George chess pieces. The Jacques of London produced new modified designs in 1842. The pieces were made from crafting the wood precisely with heavyweights. Some pieces were made from African ivory too. The size of the king piece usually varies from 3.5 inches to 4.5 inches. Today many variations of chess pieces have appeared but mostly follow the gold standards of Jaques chess. The modern pieces are heavily weighted as compared to the older pieces and are more precisely curated.