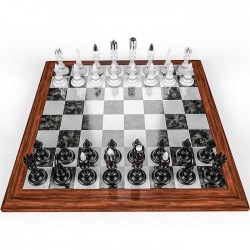 Chess is one of the most prevalent mental board games played worldwide. The game is played on a specific game board with chess pieces, known as the chessboard. The board has a square circumference with alternating box patterns. The chessboard serves as an essential key for playing the game. It is the ground where all the chess pieces are put forward by a player to checkmate the opponent’s king.

Manufacturing of the Chessboards

The chessboard is manufactured of wood or any firm, durable fibre such as ebony, ivory, marble, metal, glass, and plastic. For international or continental championships, FIDE stated that only the wooden boards can be used. For other FIDE tournaments, plastic, wood, or cardboard boards may be used, and the board must be rigid in all respects. The board can also be made of marble, as long as there is a suitable contrast between the light and dark squares.

The board has sixty-four total squares arranged uniformly in eight rows and columns. The squares are arranged in two alternative colours (black and white mostly). The squares are generally numbered via using algebraic notation. The ranks (horizontal rows) are numbered from 1 to 8 and counting start from the white side towards the black side. The files (vertical columns), on the other hand, are enumerated by using lower alphabetic case letters.  The length of the squares should be 5 to 6.5 cm and the ratio between the squares and the pieces should be such that the side of a square should be twice the diameter of the base of a pawn.

Various parts of a Chessboard

Evolution of Chessboards throughout the years

The chess boards were used for the first time around the 6th century in the ancient Indian era. In India, it was regarded as Chaturanga, and the chessboard was known as Ashtapada. The Ashtapada board had a monochromatic colour and eight divisions of each row and column. The board has distinctive marks known as the castles in the first, fourth, fifth and eighth squares in a, d, e and h columns. The Ancient Persian used a little modified chess in which more number of rows and columns were added. In today’s time, three-dimensional boards are also being used. The recent Raumschach variant has five boards in total with 25 squares each, leading to a sum of 125 squares. Nowadays, computer-generated boards are also used to play e-matches. The modern chessboards are more durable than the ones used in earlier times.