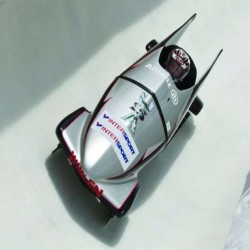 The sleigh used in bobsleigh is manufactured to have high speed and efficiency. The equipment should be strong as two or more athletes climb and travel at almost 135 km/hr speed, encountering 5G force in some turns. They have the aerodynamic feature to reduce the drag force that affects the speed of the sleds. The main challenge in bobsleigh is to maximize acceleration. The same is managed by evenly distributing the weight in the sleigh.

The manufactures use lighter carbon fibre for the shell region as the lower section carries the maximum weight. The engineering with the lower-centre portion has transformed the bumpy turns to smooth. This could be possible because of the even distribution of weight. Another component that plays a vital role in minimizing forces is the runners. These are the only section of the sleigh that comes in contact with the ice. These are polished and coated to control the friction.

The first sled dates back to the 19th century. The sport was an adaptation of boys delivering luggage through toboggans and sleds. Initially, the sleds were hand-built and made of wood which later converted to an aerodynamic steel vehicle with lightweight runners. The wooden sleds weren’t used for a long time, but the name continued.

The sleigh components are thoughtfully designed to allow the dynamic adjustment of mass through the curves of the bobsleigh track.

The steering system in modern bobsleigh consists of two metal rings located in the front cowling section of the runner.

As per the International Bobsleigh and Skeleton Federation, here are the specifications of bobsleigh sleigh :