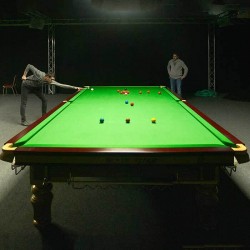 The billiard table is a fixed table on which billiards is played. The same table with exactly similar dimensions and specifications are used in snooker as well. The table has a flat surface with a total of six pockets (holes). The cover is either made of woven wool or baize (wool-nylon blend cloth) and is bordered by the vulcanized rubber material and cushions so that the balls can bounce back.

The history of the billiards table is unclear. However, the sport's theory revolves around the 15th century in France and England with the sport's evolution. There the billiards table was mentioned as the indoor version of a lawn for a game similar to croquet. This table had various names depending on the game where it is used. For example, in pool matches, it is regarded as a pool table, and in snooker matches, it is referred to as a snooker table.

Components of Snooker and Billiards Table

The billiards table of having the following parts -

Dimensions of Snooker and Billiards Table

The playing area for billiards or snooker is standardized by the World Professional Billiards and Snooker Association (WPBSA) and the amateur International Billiards and Snooker Federation (IBSF). The official tables have a length of 11 feet and 8.5 inches and a width of 5 feet 10 inches. The governing bodies accept the tolerance of 0.5 inches. This implies that the table could be 12 feet by 6 feet, including the rails. The floor's height to the top of the cushion is between 2 feet 9.5 inches to 2 feet 10.5 inches. The smaller tables have a length of 10 feet and a width of 5 feet.

Evolution of Billiards Table through the years

The fifteenth-century tables depicted lawn for an indoor version of a game similar to croquet. These tables contained a wire-gate to strike a wooden peg. The function of the 6 pockets around the edges of the table couldn't be traced. In those days, the billiards table had vertical walls around the edges. They kept balls from falling off the table. The record of the first billiards table sale dates back to 1470 to King Louis XI of France.

By 1674, the wire gate and upright wooden peg disappeared from the billiard tables. The table's playing surfaces were made of wood; thus, they tended to warp. The problem led to the beginning of padding the banks with cloth stuffed with either horsehair or rags. During the 1700s, the 2:1 ratio of length to width was declared standard. Rails were padded with firmly rolled cloth, constructing a relatively more predictable ball rebound.

Between 1800 and 1850, diamond-formed sights were added to rails. Slate was familiarized as a superior table surface. And, vulcanized rubber (which upheld its properties irrespective of temperature instabilities) was hastily adapted for rail cushions. Subsequently, refinements in pool tables construction techniques began. For instance, traditionally, the tables' horizontal holes were drilled in the slate's edges and filled with molten lead; screws ran through the rail's vertical edge were stiffened into the lead-lined hole. Presently, the rails are attached to modern tables with the help of a vertically inserted bolt in the slate. The modern-day tables bear a slight resemblance to the tables that existed decades ago. These days the tables have cleaner lines, architectural bases, and elliptical open sides design.  They are available in sleek metal legs or a wooden look alike. The modern-day tables come with several hi-tech facilities. They are more durable and eye-pleasing.