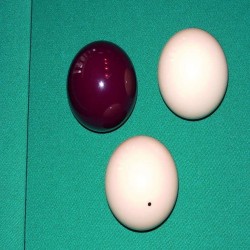 Billiards is a popular game played on a rectangular table with balls designated with specific numbers and a cue. Major cue sports such as English billiards are played with 3 balls and snooker with 21 balls and a cue ball. Pocket billiards or pool is played with 15 balls along with a cue ball. The billiard ball is usually smaller and hard which differs in dimensions, color and diameter depending upon the game.

In carom billiards (also referred to as carambole) game, three balls are required to play a match without any specific number. The balls have a diameter of 61 to 61.5 mm. The white ball on the table is used by the first player, the white ball with yellow spot is used by the second player and the third ball with red and blue colour is used as an extra ball.

The pool balls are similar to the carom billiard but have a smaller circumference. They are used to play various games such as the eight-ball, nine-ball or the regular straight pool. The pool balls have a diameter of 2.04 inches and weigh approx 5.5 oz to 6 oz (160 grams to 170 grams). The pool balls are numbered respectively and have different colours. In three-ball and straight pool, variants do not include balls with marking.

The balls used in pocket billiards have the same circumference of the pool balls. The set includes 21 balls where1 to 16 of balls have black stripes whereas 17 to 21 do not have any specific design. The 1 to 7 balls are regarded as the solids and 9 to 15 balls have lines on them. The 4th ball is painted pink, and the 12th ball has pink stripes. The 7 and 15 balls are lightly tan instead of being maroon.

The blackball pool uses a set of 15 object balls and is not assigned with particular numbers and colours. They have a smaller circumference with 2 inches diameter to 2.36 inches. There are two distinct groups of ball used in the matches such as the red and yellow and another group of white ones. The yellow and red set of balls are also referred to as the "casino sets".

The snooker set has 22 balls arranged uniformly in a rack. The coloured balls have numbers marked on the surface to depict their points. The balls have a diameter of 2.07 inches with a weight tolerance of 0.11 oz (3 grams) amongst all balls. The eight colours used in the snooker match were derived from the game of croquet.

The game uses a set of 15 number balls which is all white, and red and yellow cue balls. The balls have a circumference of 68 mm.

Novelty balls are the balls with some playing card markings, some with other stars and stripes and yet with sets of over thirty balls in many suits. Novelty balls are usually referred to as bobble ball and tag ball. Their miniatures are generally decreased by 2/3rd or ½ of the original size.

Evolution of the Billiard Balls

The billiard balls have been evolved drastically since a couple of decades. During 1600 the balls were made from elephant ivory, wood, clay and ox bone in Europe. The balls were numbered by dying through natural colours. By 1869 nitrocellulose was used for billiard balls. By 1870 it was commercially available and manufactured under the brand name of Celluloid. However, celluloid balls were volatile and hence were dangerous to use. In modern times, balls are made from polyester and phenolic resins and acrylic. The modern balls have a smooth, shiny appearance with numbers marked on them.