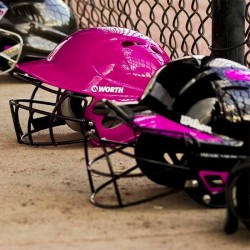 Sports have always been everyone’s favourite and has been enjoyed by all age. Meanwhile, baseball has emerged out as a popular sport in the western country. As the game started to gain popularity, the primary focus of safety also become a significant concern. The batters are required to wear the helmet during the whole match. The primary objective behind the wearing a helmet involves protection and prevention of any injury in the head and face. Helmets certified by the National Operating Committee on Standards for Athletic Equipment (NOCSAE) are only acceptable to be used in the match.

The batting helmets cover only one ear. For a right-handed batter, the flap is present on the left ear and vice versa. For a switch hitter batsman, they have a flap present on both sides to cover the ears, or they might be using two helmets in an entire match. Helmets with double flaps are majorly used in various major tournaments. The double-sided flapped helmets have a dual role as a protective gear during running and pick off attempts.

The batting helmet should be placed 1 inch above the batter’s eyebrow. The helmets should be raised in the middle and not build in an upward and downward direction. Some helmets are also aided with chin straps. Chin straps aren’t present in every significant tournament but are still mandatory in various minor leagues.

Evolution of batting helmets throughout the century

In 1905, the first basic helmet was manufactured by Mogridge with a patent no. 780899 and regarded it as a "head protector". It looks similar to an inflatable boxing glove wrapped on the batters head tightly enough to avoid any injury. They were identical to protective ear muffs which protect the ear more than the head region. In 1913, head protectors were worn by Frank Chance with more sponge padding. In 1921, the awareness for head protection was emerging like a wildfire. Pat Moran for the first time provided cork-cushioned hats to their players in Philadelphia Phillies. By mid-1940s, many fatal injuries were caused due to negligence of head protection by various famous top players such as Ray Champion and Mickey Cochrane. On 1st June 1937 due to reoccurring injuries of the athletes, the Cleveland Indians and the Philadelphia Athletics were the first teams who tested the helmets for the first time by using leather and polo helmets. In the western league, the players from Des Moines Demons were the first one to wear a protective helmet.

In 1939, the proper baseball helmets were included in the International league. The safety helmets were included in the essential official types of the equipment list. In the 1941 national leagues, safety protection gear manufactured by George Bennett was used. In 1950, the governing body of Little League Baseball made it compulsory to use a helmet in the official matches by all the players.

Modifications in the baseball helmet

In 1960, the first helmet used in the Major League Championships consisted of earflaps on both the sides of the ear and were able to sense a ball travelling at 120 mph (190 km / h). In 1961, helmets were manufactured with makeshift earflaps for the safety of the participant’s face as well as the head. Since 1983, players were required to wear helmets with at least one earflap.

In 2005, a new variant of batting helmet with a moulded crown structure with side and back vents along with larger ear holes were used. In 2007, the coaches were also required to wear a helmet as a must rule.

In 2009, Rawlings manufactured the S100 Baseball Helmets which were resistant to fast pace balls travelling with 100 miles per hour speed from 2 feet away. Since 2013, the MLB players were required to wear the Rawlings manufactured S100 Pro Comp. In 2018, several players wearing the C-flap, an attachment to the earflap covering the jaw was invented by Markwort. The C-flap quickly caught on in Major League Baseball, and now batting helmet manufacturers such as Rawlings and Easton have begun producing helmets with built-in earflap extensions that emulate the C-flap.