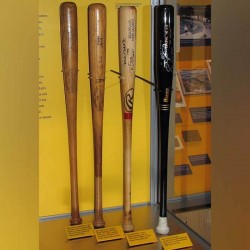 The baseball bats are the primary equipment used in a baseball match. The baseball bat is used for hitting the ball as far as possible with high speed and strength. It is usually made from wood or metal such as aluminium or iron. The batters typically get to hold the bat and strike against the pitcher’s raid. The wooden bats are usually made from maple, hickory and bamboo along with ash. Usually, the hickory bats weigh more, and therefore these are discarded for further use.

The modern baseball bat has a diameter of 2.75 inches (7.0 cm) maximum in the barrel region and a length of 42 inches (1.067 cm) maximum. The bats weigh between 34 ounces to 36 ounces, i.e. 960 grams to 1 kg. These are composed of a metallic alloy such as aluminium and cork or from one piece of wood. A baseball ball is consisted of following sections -

Usually, the baseball bats are primarily classified as wooden and non-wooden type. Some of the common types of bats used in a match include -

The hybrid bats are made from mixing the composite material with the metal alloys. The bats have a composite handle for better grip on metal alloy barrel. Hybrid bats are light in weight and provide adequate grip and practical for striking the ball.

The alloy bats are also regarded as the metallic and sometimes as an aluminium bat. These bats are financially cheaper and are smaller in length. The sweet spot where the ball is stroked also has a smaller circumference which leads to difficulty in striking.

The composite bats are the most common types of bats available in the market. These are manufactured from carbon fibre polymer which leads to an even distribution of weight. This helps in the natural uplift of the bat and striking hard when the balls hit. These bats require about 150-200 break-in swings for a perfect sweet spot. The sweet spot has a bigger circumference to hit the ball quickly. The composite bats have lots of precision, and hence they are financially expensive.

The fungo bat has a longer length and a lighter weight as compared to other regular bats used in baseball. They have a range between 35 inches to 37 inches (89 cm to 94 cm) with a total weight of 17 to 22 ounces (i.e. 480 to 620 grams). The sweet spot has a smaller circumference which is therefore easy to strike with when the ball hits. It provides a better grip and easy control to the batter. This is the prime reason behind the excessive use of fungo bats in commercial tournaments.

In 1884, the first bat was invented by Louisville Slugger known as the wooden-ash bat. As the years passed, ash wood became very popular with sportsmen. In 1890, a bat was patented by Emile Kinst known as the banana bat or ball-bat. It had a curved end for the comfortable striking of the ball. Later in 1906, the mushroom bats were manufactured by Spalding. The bats have a mushroom-shaped knob present in the handle. The knob helps in the even distribution of the bat. In 1990, the bats were modified by adding an axe handle. Patent for the axe-bat goes to Bruce Leinhart in 2007. The bat was used widely in college tournaments and pro-league championships. By 2008, wooden bats specially made with maple were used. Apart from maple, bats were made from ashes, bamboo, etc. The maple bats are significantly produced in association with the Major League Baseball.

A baseball bat is primarily made from two different hybrid materials in modern times. The barrel is made from wood whereas the handle is made from metal. The bats are evenly distributed with reduced weight. The grip helps the batter to perform well and provides proper strength to athletes.