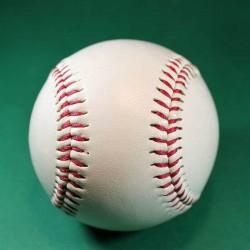 Baseball is a popular sport, especially in western countries. It’s a non-contact team sport where both teams perform batting and ball fielding. The primary goal of the participant is to score more runs. The squad playing the fielding are the defensive one and batting team is considered as the offensive one. The sport was originated in 1845 in New York City. The baseball ball is one of the primary equipment required in the game.

The manufacturing of Baseball ball as per the official rules

The baseball ball is manufactured with a hard cork and rubber core. The ball is tightly wrapped with yarn for attaching two pieces of white leather, covered with two strips of white horsehide or cowhide, stitched together tightly. The ball is spherical with 9 to 9.5 inches circumference (approx. 23 to 23.5 cm) which weighs approximately 5 to 5.25 ounces (142 to 149 grams). The outer leather surface is created by stitching two peanut-shaped covers with red-dyed thread. The pieces are tightly sewn to improve the trajectory motion of the ball. The baseball has three primary compartments -

The interior is made from two hemispherical black rubber ball shells joined by red washers. The pit has a circumference of 10.47 cm. The outer cover of the baseball is made from number one graded Alum tanned cowhide from the Midwest Holstein. The primary reason for using Midwest Holstein cowhide is due to their higher quality grain which is clean and smooth than any other United States cattle area.

The cover of the baseball is usually white, which is stitched by waxed red wool. The cowhides are always tested before their uses to ensure their quality. The cowhides are required to meet the quality parameters of adequate grain strength, tensility, thickness etc.

The youth tournament baseball ball has a central padded cushion filled cork which is packed less tightly than the official senior baseball matches balls. The Youth league baseball balls are suitable for players from 8 years old to 14 years old. These balls are included in various Little League tournaments played with aluminium bats. These balls are moderately hard and of the smaller circumference and widely used in the under 14 official matches of baseball.

The baseball balls used by the High-school and college-level athletes have similar pro-grade baseballs but are light in weight. The balls are less dense which are specially designed for aluminium bats instead of wooden bats. The outer covering is usually provided either by leather or any other solid synthetic material.

The Professional baseballs are the official balls used in all major and minor tournaments. They are denser in quality and made from high-quality raw material. The leather used for the outer cover is perfectly sewed, which is neither flat nor raised in texture. The professional balls are suitable only for wooden bats.

These are the regular smaller and cheaper version of the high-grade professional baseball. The balls are made from inexpensive low-grade materials as a replacement to leather ad corks. These are suitable for amateurs and initial practices.

The safety baseballs are manufactured for amateurs of 4 to 8 years old. These are suitable for the starter’s leagues matches. They have a softer outer surface and light in weight. They are built from inexpensive raw materials which are hit against any small, lightweight aluminium bats.

The reduced Injury factor baseball has better performance rate than the safety balls. The core is made from the poly base, which makes it softer than other regular professional hardballs. These balls also reduce the risk of any significant injury. The baseballs are suitable for any age levels and are widely considered for practising.

During 1800 the baseball ball was available in variable sizes, shapes and weight depending on the manufacturer. The baseballs during the ancient times were primarily manufactured from rubber core, wrapped by low quality leather and yarn. Sometimes fish eyes were used as an alternative for the core. In the 1850s the standard baseball weighs 5.5 to 6 oz with a total circumference of 8 to 11 inches. The balls were completely handball and hence had less tensile. The live balls with more rubber material and tight winding were preferred than the loose winded dead balls. In 1910 the first ball with cork material filled core was introduced. In Australia, the balls were made with the machine for the very first time in 1920.

In modern time, the balls are manufactured with the primary objective to increase the tensile and strength of projection. Today the cores are made from cushioned wood. Today a broad kind of synthetic materials are used for manufacturing the baseballs for unofficial and training matches. The Rawlings has become one of the significant manufacturers of league balls where they use stitching for fixing the leather.
*We crave for more modifications and accuracy. Help us do that with your valuable feedback. No responsibility is taken for the authentication of the data.