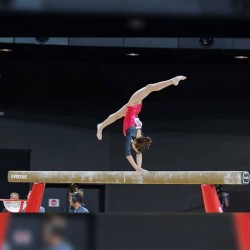 The balance beam is a cylindrical log on which gymnastics are performed by balancing over it. The event in which the balance beam is used is also known as the 'Beam'. The beam is a thin, small device that is typically raised from the ground on a stand or leg at both ends. They are covered with leather-like material and are four inches wide. Traditionally, the beam surface was made from plain and polished wood. Previously, some gymnasts competed on a basketball-like material covered beam. Eventually, this type of cover was banned, subject to its slipperiness. Since the 1980s, beams are covered in leather or suede. Presently, they also have a spring to control the stress of high-exertion tumbling and turns and poses.

The anatomy of the Balance Beam

The balance beam is 4 feet 1 inch (1.25m) in height and 4 inches (10 cm) in width, and a total of 16.5 feet (5m) in length. The beams have extra padding over the surface. To increase the friction, the gymnasts also add excess chalk powder to increase the traction.

As per the Federation Internationale de Gymnastique (FIG), the standard dimensions should have the following measurements -

In the 18th century, a piece of a pine tree trunk was used to train the young gymnasts for balancing. Till 1934, the balancing beam doesn't involve the beam as their official equipment for sports. Later, the balancing beam in the form of a polished wooden block with a 13 cm diameter was popularly used. The log was fitted between two wooden supports with adjustable height. During 1965, the beam had to be adjustable between 0.80 and 1.20 m, in distances of 50 mm. However, the competition height was generally 120 cm. Its length was defined as 5 m, and that it is still today.

For the performers' safety, the wooden beams were developing in such a way as to reduce the friction. These models are less slippery to use by the participants. The friction of the beams was reduced by adding a cover of leather and suede. In the official tournaments, the performing arena with a balancing beam is covered with various padded cushions so that the participants won't injure themselves if they fall. The modern beams are made of multiple fibres to increase their balancing efficiency.