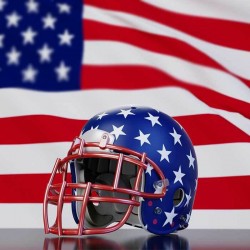 American Football is a popular sport but due to its aggressive gameplay, it is prone to multiple acute and severe injuries. The football helmet serves as the best armour to protect the players from head and face injuries. The helmet features an outer shell made from hard plastic with thick padding on the inside. It also consists of a face mask constructed with a single or multiple plastic-coated metal bars along with a chinstrap. Sometimes it is found that footballers add some polycarbonate visors to their helmets to add protection against glare and impacts. While digging in the history of American Football helmet, it was found that the early models had a flat top design without any holes for the ears. However, today these helmets have evolved into a unique design and are proficient to withstand multiple impacts.

The National Football League is a professional American football tournament. The NFL and NFLPA collaborated to test the football helmets against their protective levels. The helmets are also marked according to their performance; the best ones are marked green and lesser protective with yellow. Red marked helmets are entirely forbidden to be used in any match. According to 2019 Helmet Laboratory Testing Performance results, the top-performing helmets include VICIS Zerol (2018), Schutt F7 LTD (208400), Riddell SpeedFlex Precision Diamond (R41106) helmets and many more. However, the prohibited helmets include Rawlings Impulse, Impulse+, Quantum, Schutt Air XP and so on.

Components of Football Helmets and their Evolution