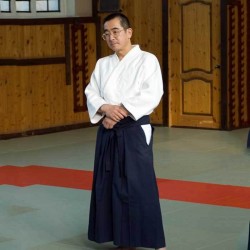 In the past few years, Aikido, the modern Japanese martial art, has been successfully creating its own space amongst the practitioners. Morihei Ueshiba developed it with a motto of combining his martial arts with philosophy and religious beliefs. The Aikido practitioners wear a special uniform called the Aikido Gi. It consists of simple baggy trousers with a wrap jacket (similar to a robe) that has short sleeves and a belt called obi. Short sleeves make it easy for the participants to practice wrist locks whereas the loose-fitting let the aikidoka to move swiftly while performing the moves.

The practitioners should always keep their gi clean. However, according to traditional views, the obi should never be washed. Some people also prefer wearing dark pleated pants hakama, which has a particular tying pattern and is hard to fold too. The Aikido gi was crafted back in the 60s by one of the major Japanese brands. These brands crafted it after the consultation with Hombu Dojo teachers of that time. The uniform resembles widely the training uniform (keikogi) of other modern martial arts. The belt has significant importance and represents the practitioner’s grade.

Historically, the traditional aikido-gi cut was based on the Judogi cut that was very wide. This gi featured longer sleeves covering the wrists and a shorter jacket length. The modern Aikido gi has the "new Aikido cut" with shorter sleeves, longer jacket length and without a back seam (if possible).