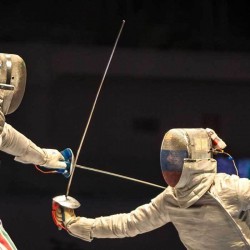 Fencing is a popular sport played involving the use of a sword. The objective of the competition is to touch the opponent with the tip of the sword. The sport involves a group of three combat games including foil, épée and sabre. Fencing was one of the first sports which were included in the 1904 Olympic Games. The épée is similar to the foil weapon but is more substantial and large. The weapon has a stiffer blade with a triangular cross-section and a fuller; it has a large bell guards present and usually weighs more. In épée event, the entire body is valid for targeting.

Manufacturing and dimension of Épée

The size 5 épée fence is the correct legally approved length to be used by modern adult fencers.  It weighs 770 grams (27.16 oz). The blade has a length of 90 cm (3 ft) and the overall length of the fence is 110 cm (3.6ft). The épée blade is triangular in cross-section and is tapered to provide a sharp point fitted with a button. The end of the épée has a circular bowl-shaped handguard which is similar to the foil but has a larger size. The épée blades are made from low-carbon steel. There are three major parts of a sword -

The grip - It is a part of the épée sword from where the fencers hold the weapon. It provides high balance and comfort. The grip is the extended portion present on the sword. Types of grips are as follows -

​The guard - The guard is basically a rounded piece of a flat metal that protects the fencer’s hand. The guards come in various styles and sizes based on the weight, hand size, protection and so on. The lining of the guard has padding inside it. These pads are usually made from leather, plastic and cloth. The plastic pads are transparent so the fencers & officials can see through during examining of the weapon.

The blade - The blades are usually made from low-carbon steel. It easily bends when touches or strikes the opponent’s body. Bending reduces any injury and physical impact. The blades are very light-weight to allow fast touches and ensure prevents the fencers from getting tired too quickly.

History and Evolution of Épée

The épée fence was evolved from the light traditional weapons such as the small sword used in the late 17th century which was the most commonly used duelling sword during that time. During the non-electric fencing era, small spikes were used at the tip of the sword to determine the number of hits but it was a very painful procedure for the fencers. So after the evolution, tips dipped in a dye were used in the swords to determine the location of the touches.

The electric épée sword was used officially at the 1936 Olympic Games and then modified a few times to give it its modern structure. In modern times, the swords are designed to have a blunt end to prevent the fencers from any injuries and the non-electric ones are only used for practice purposes.