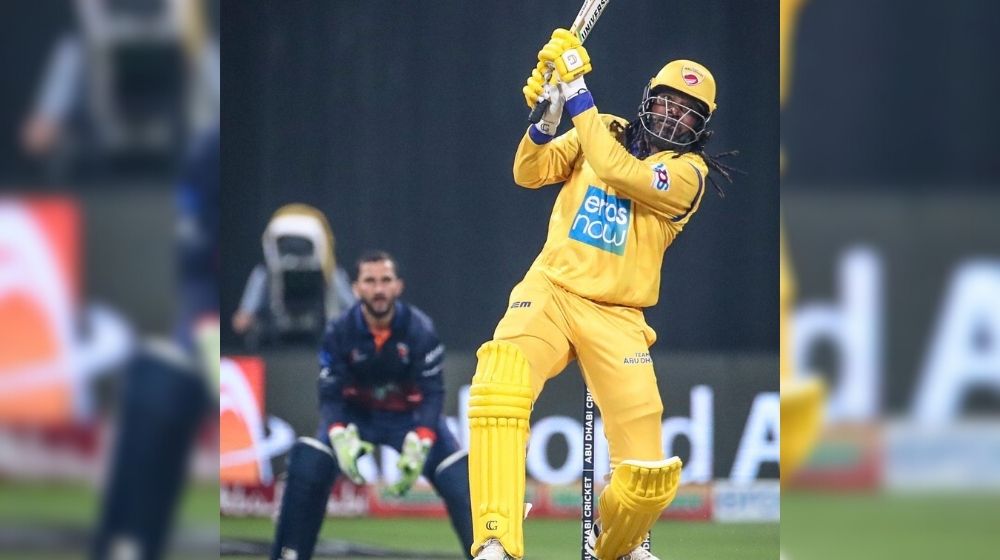 Gayle storm destroyed Maratha Arabians in T-10 League when he scored an unbeaten 84 off 22 just balls with nine sixes and six boundaries, leading Abu Dhabi to a nine-wicket victory in the 2nd match of the Abu Dhabi T10 League.

Chasing the moderate 97 of 4 total for the Maratha Arabians, Gayle led his team to reach the target in just 5.3 overs to win the match with 27 balls to spare.

Known as the Universe Boss, Gayle dominated the attack. He was in his universal form from the first over of his innings as he wiped out the line and length of the Arabians bowlers from the beginning. Gayle hit all of his sixes and boundaries so easily that it was pleasant to watch its strength and scope.

Earlier, Abu Dhabi won the toss and was elected to field first. Arabians scored a total of 97 for 4 in 10 overs with the help of UAE’s 18-year-old opener Alishan Sharafu who scored 33 runs and Mohammad Hafeez’ 20 runs.

Abu Dhabi’s Tom Helm bowled the last over and gave only eight runs to prevent the Arabians from reaching the 100-run mark.

Chasing an easy target, Gayle gave Abu Dhabi a good start, as he hit Yamin Ahmadzai with three consecutive boundaries and a six to steal 18 runs from the first over. Along with Gayle, opener, Paul Stirling also hit two consecutive boundaries in the first two balls of the second over of Sompal Kami. After a single by Stirling, Gayle scored three sixes in the last three balls to get 27 runs from the second over.

After Mosaddek Hossain got Stirling’s wicket with the second ball in the third over, Gayle then smashed the last four balls with two boundaries and two sixes to take 20 runs.

The Arabs then introduced Maroof Merchant, a 16-year-old bowler of UAE, into the attack. Although he bowled the first four balls tightly to Gayle, the Universal Boss wake again and smashed two sixes in the last two balls of the fourth over.

In the fifth over, Ishan Malhotra only gave ten runs. Gayle hit the winning six over mid-wicket in the third ball of the sixth over of Mukhtar to reach the target to all bowlers and fielders’ relief.

However, 78 out of his 84 runs came from the sixes and boundaries.