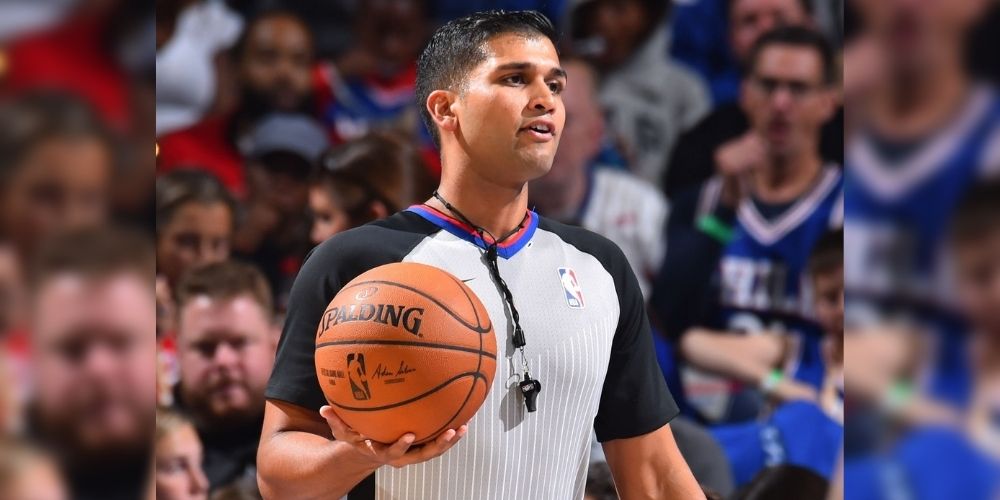 Nowadays, you can see Suyash Mehta officiating the games of the National Basketball Association (NBA), dictating the rules to James Harden, Stephen Curry, LeBron James, and all the famous players in the basketball world.

However, Suyash would not have been on the basketball court today if he had not dropped out of medical school to pursue his dream of becoming a basketball referee.

After officiating five seasons in the G League and serving as a freelance official in the 2019-2020 NBA seasons, Suyash Mehta of Indian descent is one of only three to be promoted to the full-time official rank in early 2020-21 NBA season.

In December, Suyash Mehta became the first Indian- origin referee promoted by the NBA to a full-time staff official.

Speaking about his appointment, Mehta said he would never forget the moment he learned that he had been promoted to a full-time official NBA referee.

“It is something that I will never forget, November 27, 2020, and I remember it like yesterday. That is the day I got the call from our direct supervisor Monty, and I know exactly where I was when I got the call and what time it was. I remember getting the call and completely freezing and melting down and saying if this was real and if this really happened. I took a moment to understand all the years of sacrifice and hard work had finally paid off,” Mehta said during a virtual press conference.

This decision did not come easily to the Baltimore native. But it was harder to convince his Indian-born parents that he wanted to switch from medicine to sports.

“After that, I made the first call to my parents to tell them that I was hired as a full-time NBA referee and hearing the joy in their voices because they were also there for the entire journey of me putting back medical school going through the five years in the developmental league which was finally paying off. It was a phone call I will never forget, I will always cherish that, and I hope that I always remember the humility that has brought me to the point where I am today,” Mehta added.

Before being hired by the G League, the NBA’s official minor league, Mehta was refereeing in the high school and college basketball games without informing his parents.

“Every time it was like, ‘hey mom and dad, I am leaving the house, I have to go to work.’ They never really knew where I was going or what I was doing. They thought I was going to the gym and will be back in two three hours,” said Mehta.

Mehta, who revealed he played basketball in high school and a bit of club basketball at the University of Maryland, never thought of becoming a full-time NBA referee.

“It was something that I was doing as a part-time job in college. And then, we had this opportunity after college that allowed me to pretty much try out for the minor league, which was the NBA D League at the time, which is now the NBA G League,” Mehta added.

Suyash’s father, a doctor who hails from Chandigarh, and his mother, a botanist from Saharanpur, Uttar Pradesh, never watched any live sports and found it difficult to accept their son’s new career choices until they saw him as the referee.

“I think the true acceptance came when I took my parents to the Las Vegas Summer League. I saved up whatever I made in my first year, booked the plane tickets to Las Vegas, put them in a hotel room, and invited them for my first game. They were sitting courtside. I remember seeing their faces; they were so happy to see me out on the court. At that moment, they understood that it was a big deal,” remembered Mehta.

From that point on, Suyash made the most of his opportunities, going from college conferences to 5 seasons in the G league and now refereeing as a full-time official in the NBA.

Mehta’s first game as a full-time official NBA staff referee came just days after the announcement was made that he would be appointed as a staff referee for a game between the Chicago Bulls and the Golden State Warriors at the United Center.

“I just went out and walked right down to the Chicago Bulls floor and took a quick five-second, 360-degree turn around the arena,” Suyash expressed about his first game, doing exactly what his mentor told him to do.

Meet the NBA's first full-time Indian-origin referee, Suyash Mehta. Learn how he shifted from pre-med to pre-ref in college and achieved the goals he set for himself with discipline and determination: https://t.co/hOf2iGKvM4 pic.twitter.com/4p4GdzahLB