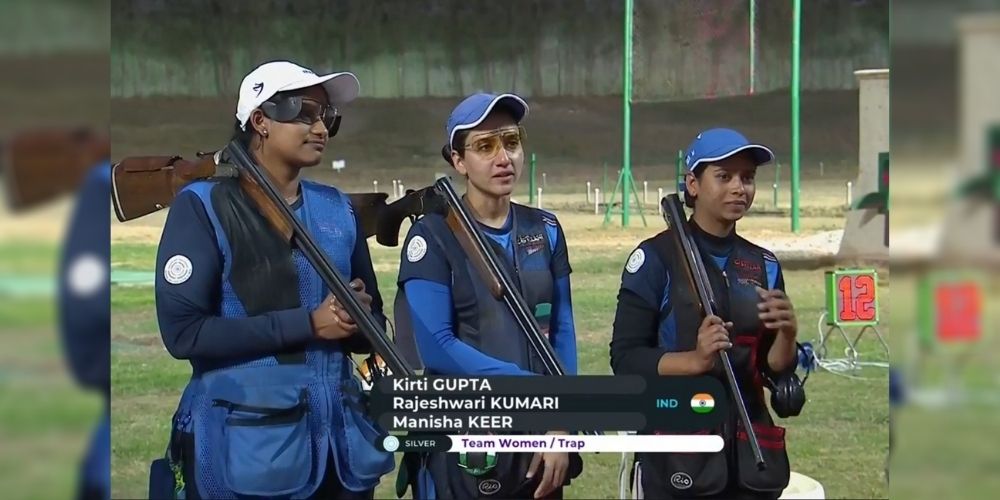 The trio of the Indian women's trap shooting team Kirti Gupta, Manisha Keer and Rajeshwari Kumari, lost 4-6 to Russia and claimed the silver medal on the final day of the ISSF World Cup in Cairo.

The Indian team had a fantastic comeback on the final day for the gold medal on Thursday, returning 0-4 to level the final 4-4. However, it could not hold out in the last series of 15-shot per team and was content with the silver medal.

Thanks to the trio's efforts, the Indian team finished the world cup with two medals, and the men's skeet team won bronze at the start of the tournament.

Kirti, Manisha and Rajeshwari combined 444 points to reach the gold medal match, with Russia leading the qualifying round with 463 points. There were seven rounds of 25 shots, five of which were shot in the previous days.

On Thursday, all three Indian women have scored 20 or more points in the last two qualifying rounds, with Manisha hitting 158 out of 175 shots.

However, the men's trap team could not make it to the medal rounds after scoring 469 points and finishing sixth of 11 teams in the scrum.

Russia and Croatia made their way to the gold medal match, while the hosts of Egypt and Slovakia had to fight for the bronze.

The Indian women’s trap team of #KirtiGupta, #RajeshwariKumari and #ManishaKeer win the silver medal at the @ISSF_Shooting Shotgun World Cup in Egypt after a narrow 6-4 defeat to Russia. Kirti and Manisha are #TOPSAthlete (Development). #Shooting #Trap pic.twitter.com/OciHEJlB9d