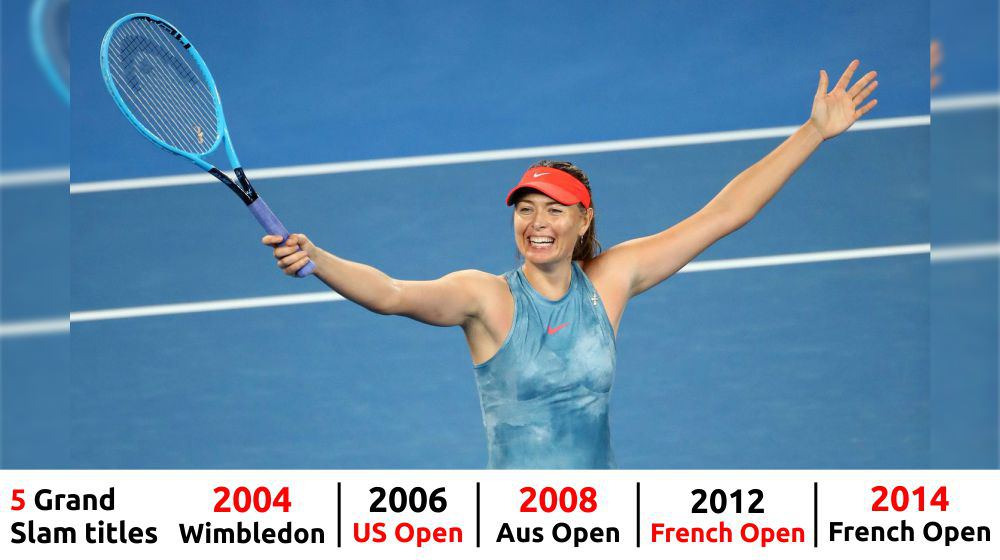 Maria Sharapova, the five-time Grand Slam title winner, one of the world's most recognized and highest-paid sportswomen, announced her retirement yesterday.

In a written essay for Vanity Fair and Vogue Magazine about her decision to get away from the sport, Maria wrote:

"How do you leave behind the only life you've ever known? I'm new to this, so please forgive me. Tennis - I'm saying goodbye. Tennis showed me the world - and it showed me what I was made of. And so in whatever I might choose for my next chapter, my next mountain, I'll still be pushing. I'll still be climbing, I’ll still be growing."

She rose to fame in 2004 as a 17-year-old Wimbledon winner, the third-youngest player to win the sacred grass courts of the All England Club.

She became Number One in the World in 2005, and won the US Open next year.

But in 2007, Maria began her long intermittent battle with shoulder problems. She has won the 2008 Australian Open before a second shoulder injury kept her out of the US Open and Beijing Olympics during the second half of the season.

Maria Sharapova captured the 2012 French Open and became the 10th woman to complete a career Grand Slam. In the same year, she bagged a silver medal in the Olympics. She also won the 2014 French Open title, which was another great achievement for her after an injury.

But her right shoulder has been in a problem time to time for more than a decade. Sharapova has barely played in the last year due to long-standing shoulder problems. When she appeared, she lost as many games as she won and was eliminated in the first rounds at Wimbledon, the US Open and, more recently, the Australian Open in Melbourne.

The current ranking of Russian former world number one is 373.

Sharapova, who has won 36 WTA titles in her career, did not give fans the chance for the final wave. In Melbourne, when asked if she had played her last major game, she said "I don't know. I don't know. I was fortunate to get myself to be here, it's tough for me to tell what's going to happen in 12 months' time. I haven't thought of my schedule moving forward from here yet."

"In giving my life to tennis, tennis gave me a life. I’ll miss it everyday. I’ll miss the training and my daily routine: waking up at dawn, lacing my left shoe before my right, and closing the court’s gate before I hit my first ball of the day," Maria said in her retirement missive.

She added "I'll miss my team, my coaches. I’ll miss the moments sitting with my father on the practice court bench. The handshakes - win or lose - and the athletes, whether they knew it or not, who pushed me to be my best. Looking back now, I realize that tennis has been my mountain. My path has been filled with valleys and detours, but the views from its peak were incredible."

Men's world No. 1 Novak Djokovic stated "Her impact on the sport, not just women's tennis, but tennis in general was great. It still is great. It's going to keep on being present because her brand exceeds her tennis achievements. She has the mind of a champion, someone that never gives up. She's shown that especially in the last five years. She had a lot of obstacles and difficulties, especially with her injuries and everything that she had to endure in order to give herself at least another chance to play competitive tennis. For someone who is legend of the sport, it's not easy to restart all over again. She has done that so many times in the last five years. Great respect to her."

According to Forbes Business Magazine, Maria had been the highest-paid female athlete in the world for 11 years until 2016.