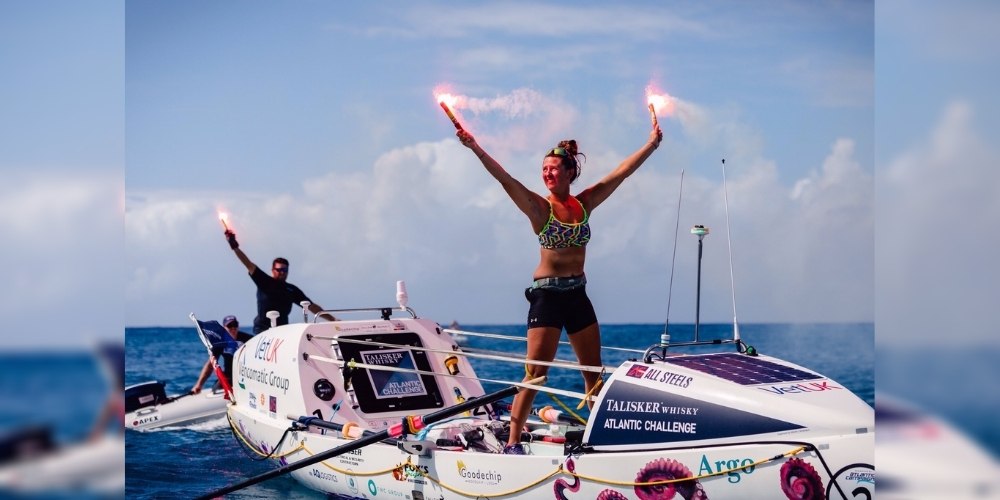 England's Jasmine Harrison sets a world record for the youngest woman to row solo across any ocean, according to organiser Atlantic Campaigns.

The 21-year-old Briton became the youngest woman ever to row solo across the ocean, completing a 3,000-mile journey across the Atlantic in 70 days, 3 hours and 48 minutes to finish the 2020 Talisker Whiskey Atlantic Challenge on Saturday.

Twenty-one boats from around the world took part in the competition this year, which featured some solo rowers and others with teams, according to the Atlantic Campaigns, which organises 'The World's Toughest Row' challenge.

"Rowing an ocean is not over until you step safely ashore, the risks remain throughout, and there is no time to relax," the Atlantic Campaigns said in a statement.

Harrison's journey began in the Canary Islands of Spain on December 12 and ended 3,000 miles away in Antigua on Saturday.

The Atlantic Campaigns regularly updated information on Harrison's whereabouts. She achieved the feat, alternating between sleep and rowing every two hours.

Harrison also kept posted weekly updates on her Instagram page, sharing her adventures, such as when she crossed from Suntiki and rowed through a patch of water covered in seaweed.

Harrison's adventure has also raised over $ 14,000 for the disaster relief NGO Shelterbox.

Harrison said, "I could be the youngest solo female ever to row an ocean and try and inspire more young people, particularly girls, just to give something a go. The more it scares you, the more achievement you can gain. Anxiety is now such a common thing over some of the smallest of tasks, I would be lying if I wasn't scared to do this knowing all the daunting obstacles that I will face, so I am asking support from everybody so that confidence-boosting can be a universal normalised (sic) compliment,"

"I enjoy travelling by myself because I see so many rewards. If you want to do something, NOW is the time; I'm seizing this opportunity to go solo," she added.

Before Harrison, American Katie Spotz was the youngest woman to row across the ocean, who crossed the Atlantic from east to west in 2010 at the age of 22.