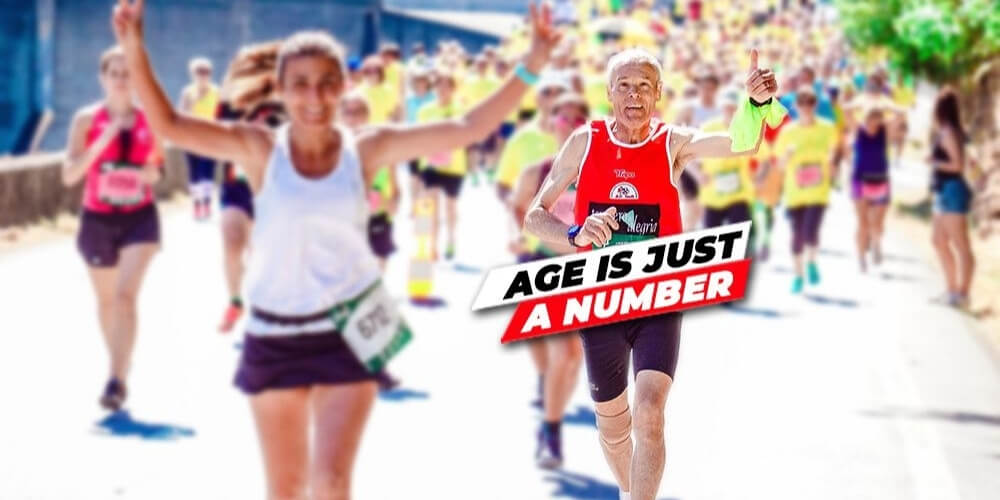 "A man is not old until regrets take the place of dreams." This is what John Barrymore believed, and the world has many examples to justify his quote.

For them, the world has nothing called "impossible", and there is no age range to achieve your dreams whether a small toddler wants to maul middle-aged chess grandmaster or an octagenarian wishing for successful skydiving.

Now talking about the world of sports, the wonders are always unpredictable, and you never know when and how an athlete may leave you jaw-dropped with his phenomenal stats in spite of his age number tending towards 100.

Honestly speaking, the number is uncountable and we can't list up all of them, but here we have summed up those Indian athletes who may have numerous musculoskeletal problems, but they undoubtedly have a strong belief to achieve what they want with their firm will.

So let's talk about the Indian sports legends who say, "Age is just a number!"

With his current personal best timing of 6 hours, 2 minutes in the London Marathon; British-Indian centenarian Fauja Singh has challenged the world to dare beyond limitations. Fauja is known as the oldest Marathon runner in the world who has beaten numerous world records that were unfortunately not ratified as records. On his 100th birthday, he attempted and credited 8 world age-group records at the Ontario Masters Association Fauja Singh Invitational Meet.

You will never believe that Fauja was unable to walk until he was five because of his thin and weak legs. Being an avid runner at the spring of his life, Fauja gave it up during the Indo-Pak division in 1947 but later on decided to resume his passion and is a live example of defeating age with his strong will.

She is regarded as the fastest centenarian in the world who never finishes her race without leaving the spectators jaw-dropped with her supersonic speed. Yes, we are talking about Mann Kaur, an Indian centenarian athlete who has added numerous medals in her athletic tally with her super fast speed and sporting spirit.

Mann began her athletic career at the age of 93 and has no limits on dreaming big. Her son Gurdev has trained her since the beginning, and they both feel proud of sharing their powerful moments on the track.

Two ace shooters of the Baghpat district, Haryana who explored their potential with the rifles and revolvers in their 60s, and today, they are leading the respective disciplines as an inspiration to follow. The initiative was not a cup of tea, and both Chandro Tomar and Prakashi Tomar had to face lakhs of taunts from the male-dominated society of a patriarchal state of India, but they believed their inner instinct and their story is now a legend.

Both shooters have credited numerous national medals in shooting, and their family is now full of young shooters who always credit them for their shooting successes.

In his 70s; Jugal Rathi was diagnosed with osteoarthritis (OA), and his orthopedist suggested him to go for an implant else he would not be able even to walk. What will you expect afterward?

Well, this story has a strange turn. In spite of agreeing to the implant, Jugal Rathi, an avid cyclist decided to recover his osteoarthritis through naturopathy, and to all our utter surprise; he completed 71 cycling rounds on his 71st birthday with an excellent message that nothing is impossible even at the grey shades of life. According to him, the root cause of decaying health is the wrong lifestyle and diet routine that are leading people to severe diseases.

Jugal's 2017 Marathon run plays a crucial role in inspiring the people of his age to kick-start their exercise routines to be healthy and fit again.

An Octogenarian citizen of Vadodara went famous with her National Award for Older Persons for Sports and Adventure that she received from the honorable President of India in 2016. Dr. Bhagwati Oza, a gynecologist by profession and an avid lover of adventures who never misses any chance to enhance the scene of courage in life and has won more than 100 medals in national as well as international events of athletics and swimming.

Oza is the only woman in the country who has done scuba diving as well as climbed up to high peaks. With daily exercises, a balanced diet routine, and proper sleeping hours, she has attained the physical fitness that enables her to dare for each of her new hobby which seems to be a nightmare for people of her age.

The age when Indian women are supposed to raise their children with proper education and etiquette; managing the home and taking care of older ones; 36-year-old Premlata Agarwal decided to move on with her dreams and became the first Indian woman to scale the seven highest continental peaks of the world.

Although the basic idea was to get both of her daughters into mountaineering; when she met Bachendri Pal and explored her interest in mountaineering.

Not only this, she took part in the First Indian Women’s Thar Desert Expedition in 2007 and 2015 on a 40-day camel safari from Bhuj (Gujarat) to Wagah Border (Punjab). Now if you still think that you can't; think twice.

A lady who went on 31 surgeries with 183 stitches in her waist to treat her spinal tumor; surprisingly went on to become India's first woman to win a medal in the Paralympics. Yes, we are talking about Deepa Malik; an inspiration for all amputees and you know at what age she decided to go for sports?

Deepa has also gone for a 1700-km drive with a climb of 18000 feet in a sub-zero temperature region. Deepa, a daughter of veteran Infantry Colonel BK Nagpal, wife of veteran cavalier Colonel Bikram Singh, and mother of two young daughters Devika and Ambika; clinched her first Paralympic medal in 2016 and made the nation proud and you know what? She is not going to stop!

These are just a few of those who believe in the eternity of potentials no matter how old you are; you form energy and zeal through your firm will and the attitude of "I CAN".