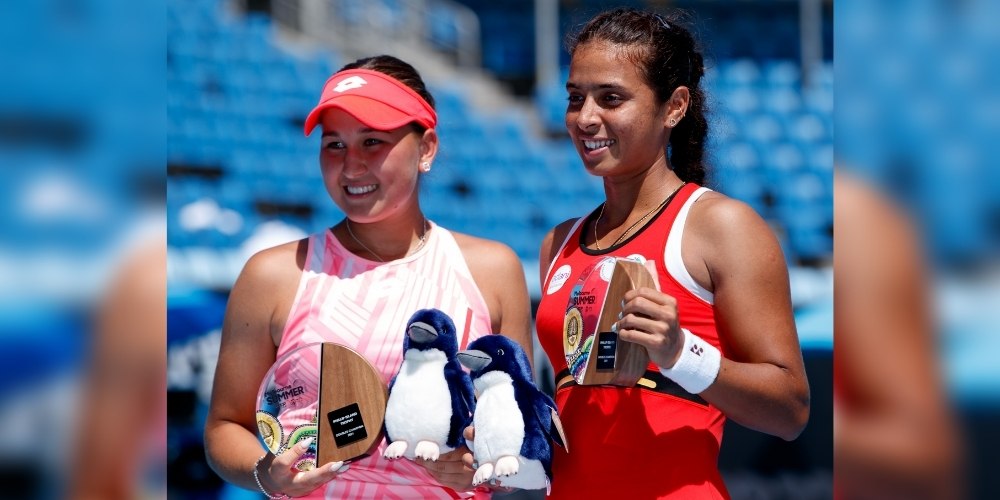 India’s tennis star Ankita Raina paired up with Russian teenager Kamilla Rakhimova at the Phillip Island Trophy, a WTA 250 doubles event held in a small corner of Melbourne Park and far from the glitz of the Australian Open, where they demolished the Russian duo Anastasia Potapova and Anna Blinkova 2-6, 6-4, 10-7 to register the biggest victory of her career.

On the court, Raina bent down after the last point before hugging her partner as she didn’t have much time to spare for the celebration on Friday after winning the big title. She had to catch another plane for the other upcoming tournament.

Raina said, “I have to pack so much stuff that’s been here for over a month. This is how it is, the match is over, the tournament is over, and now you have to fly to a new place. You don’t have much time to celebrate. Maybe I can try to have a good dinner; I hope I can do that at least.”

Raina departed for Australia on January 16 with a large tennis contingent arriving in Melbourne for the Australian Open. The trip was difficult, given that players had to go through a 14-day quarantine upon arrival. But she has managed to earn a spot in the doubles main draw, making her only the fourth Indian woman to participate in Grand Slams tournaments.

“I’m delighted and excited. It’s been very motivating for me, and it strengthens the belief. For me, the results, performances and ranking have always come first in doubles and then in singles. So I hope, in singles will follow soon,” Raina added.

The 28-year-old Raina is currently ranked highest in India in both singles (World No. 181) and doubles (World No. 115). Over the years, she has won 11 ITF Futures tournaments in singles and 18 at the same level in doubles. Until Friday, however, her biggest career victory was the 125K Series doubles tournament, which she won in Chinese Taipei in partnership with compatriot Karman Kaur Thandi in 2018. But now, that is being overshadowed by this latest victory that she can add to her collection.

Ankita, who collected a prize cheque of $4000, said, “I feel elated now that I’ll have a trophy to take back with me when I go home. It’s been a long trip, and I’ve played a few tournaments, so it’s just nice to take something back with me.”

Australia’s stay is not over for her as Raina will participate in both singles and doubles at Adelaide International. This is the second WTA 500 event that she will be participating in.

Raina is India’s 1st WTA champion since Sania Mirza. The 28yo also earned her 1st WTA MD singles win earlier in the week at PIT. https://t.co/4rJ6UV23UR